Underclassmen of the Year 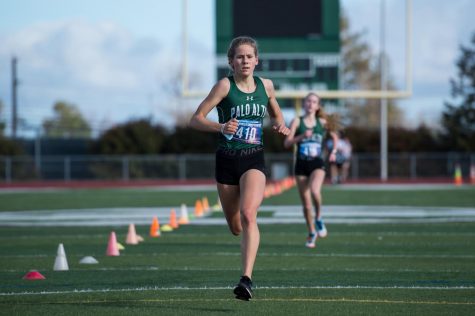 The most dominant female force in Paly cross country, and perhaps all of Paly sports, is only a sophomore. Even more remarkable is that she picked

up running only last year.. During her freshman year, Elizabeth Fetter placed 35th at the High School state championship and helped her team to the 7th place title, which she considers to be her greatest Paly athletic accomplishment so far. But Fetter is by no means a one trick pony; she has also emerged as  the fastest female swimmer at Paly.

Given her accomplishments, it is no surprise that sports play an integral role in who she is.

“I would say that sports are a huge part of my life,” Fetter said. “I have been doing them since before I can remember and I hope to continue to do them for a long time.”

Surprisingly, she only began running in high school.

“I picked up running pretty much freshman year because my older brother had done it and it seemed fun, but then I fell in love with it and with the team,” Fetter said.

Despite injuring her arm recently, Fetter continues to follow an intensive training regimen. She typically runs every afternoon with the Paly track team from 3:45-5:30 and then has club swimming from 5:30-7:00. On top of that, she attends two morning swim practices per week from 6:00-8:00 am.

Outside of her competitive sports, Fetter has also picked up road biking and participates in Sunday morning rides hosted by the Paly Cycling Club.

Sports have become so ingrained in her lifestyle that she even finds joy during tough workouts.

“It sounds weird, but I also kind of relish that feeling of pain in the middle of a really hard workout,” Fetter said. “And then, of course, the endorphin high that you get once you finish it.”

But for Fetter, sports are more than a solo pursuit for pain.

“I love sports because of the connections I can make with people,” Fetter said. “I have made most of my really close friends through athletics.”

She also humbly attributes part of her success to those around her.

“One of the reasons why it’s so fun and I’m able to have fun at practices and train so well and do well in meets is because of the team.” Fetter said. “The community that we have is really awesome.”

Because running has always been her secondary sport, Fetter has never felt pressured to excel.

During her next two years at Paly, Fetter hopes to continue to excel at a high level.

“It would be super cool to get a Paly track record in either the 1600 or the 3200,” Fetter said. “I am also really looking forward to the [cross country] and track seasons next year because of the chance to compete in CCS and States.”
Boy’s Underclassman of the Year: Grant Morgenfeld 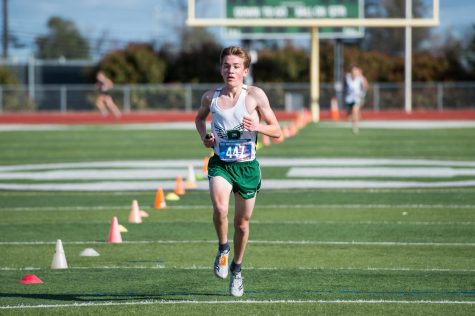 Grant Morgenfeld is a force to be reckoned with in three sports; cross country, track, and soccer. A freshman phenom, Morgenfeld’s dominant presence can already be felt around the track. Morgenfeld already boasts an impressive 4:27 mile time and has beat the Gunn cross country course freshman record with 10:35 for 2.18 miles.

Morgenfeld has always been surrounded by sports, first beginning his athletic career at a young age with baseball and soccer. Through these, he found his love for running.

“I joined the track team because it is very similar to cross country,” Morgenfeld said. “They both involve running as a team and training hard. This is what makes it so special for me, you get pushed by your teammates and you create bonds with each other that only come from hard work.”

Since then, sports have continued to play an integral role in his life, teaching him life lessons.

“Sports have affected my life by giving me discipline and showing what I am capable of.” Morgenfeld said. “There are few things that display your hardwork and determination like sports.”

Morgenfeld is an athlete with a busy schedule, often bouncing from track practice to soccer.

“A couple days a week I will go out in the morning for a short run to clear my mind and get ready for the day,” Morgenfeld said. “I will then attend track practice after school where we will either have a longer easy run or a tough track workout. On a few days I will go to soccer practice straight from track.”

Hard-working, determined, and disciplined, Morgenfeld is able to juggle three sports and beat records while also cherishing moments with friends.

“I really enjoy sports because it gives me an outlet for all the built up energy from the day. I also like the team aspect of it. Team sports allow each member to be pushed by the other, and you get to make friends along the way.”

In upcoming years keep an eye out for Morgenfeld, as he will undoubtedly lead his teams to success.

“I hope that we can get our teams back to the cross country state meets and other high level competitions. I also hope to be a good role model for incoming athletes.”
Boy’s Underclassman Honorable Mention: Tommy Butler
Remember the name Tommy Butler as he has also found immense success on the track and football field. Captaining his football team as a sophomore, he has lead his team to an undefeated season with a record of 4-0. Butler led his team in touchdowns with 4 touchdowns in just his first 3 games. He also has a 12.5 second time for the 100m dash and a 26.1 second time in the 200m dash. With a high sense of game IQ and an athletic build, Butler’s future in competitive athletics becomes brighter by the day.