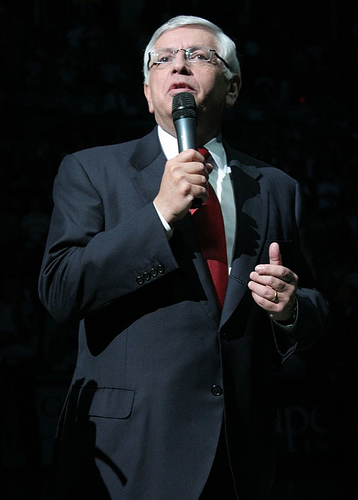 After the NBA draft lottery last Tuesday, it’s time for a preliminary mock draft. And this years’ draft sure is a doozy. With so many stellar international players projected to go in the first round of the draft, this draft could shape up like the 1998 draft, where six of the 29 players selected in the first round were international. It should be noted, though, that one of those players, Michael Olowokandi (the number one overall pick), might be one of the biggest drafts  busts of the post-shot clock era. The ‘98 draft is probably most famous for spitting out Dirk Nowitzki, one of the greatest stretch fours the league has ever seen and arguably the greatest shooting power forward ever.

Now. To the predictions. I’ll hit up the first 14 (the lottery picks) now, then predict the rest later.

The team that just this season set the NBA record for consecutive losses (26) clearly needs some help. When JJ Hickson is your third leading scorer, you obviously have problems. And trading Mo Williams and Jamario Moon for an aging Baron Davis clearly isn’t going to cut it. So while the Davis situation needs to be solved, it isn’t crucial that it gets solved now. We’ll just come back to it later. The post problem, however, is. That’s why the Cavs are going to take Arizona sophomore Derrick Williams. Williams is a physical post player which will help the drought of rebounds in Cleveland, who ranked 21st in total rebounds per game last season.

The T’Wolves are in dire straits. Their two point guards of the future (Jonny Flynn and Ricky Rubio) have essentially evaporated. Flynn hasn’t played up to expectations, which is why he’s currently backing up Luke Ridnour. And who knows if Rubio is ever going to be smart and get out of Spain. Minnesota has a bunch of holes, but if their front office is smart, they’ll pick the best player on the board, which will be Irving. Their front office has also insinuated that they might try to shop this pick, and should it be Irving, many teams will be interested in strengthening their backcourt by adding Irving.

The Jazz traded away their franchise player in Deron Williams after his publicized spat with then-coach Jerry Sloan, while simultaneously trading away their chances of doing anything in the playoffs. Good one. What the Jazz really need is a shooting guard, but they aren’t going to waste their first first round pick on a shooting guard this early.  They’ll waste it (hopefully not) on a point guard, because of Devin Harris.  Harris didn’t cut it in Jason Kidd’s departure from New Jersey and he didn’t cut it again in Williams departure in Utah. The Jazz will hopefully use their clairvoyance and pick Knight like they did Williams. Williams was a franchise player, and Knight can be too, because he can play on and off the ball well and has a huge upside.

Now we can solve the Davis situation. Cleveland at this point could either go with Walker or Brandon Knight, depending on who the Jazz take third. Both are legitimate threats and can command offenses. But, given a choice, I think the Cavs will go with Walker simply because he is a proven winner, coming fresh off that NCAA tournament win. Walker can also dance his way into the key and dish off to Williams, who is a great finisher around the basket.

The Raptors have some depth in their backcourt, with Jose Calderon, his replacement Jerryd Bayless, DeMar DeRozan and Linas Kleiza as guards. Granted, Leandro Barbosoa is backing up DeRozan, and he is more of a fourth or fifth option, but still. The backcourt clearly isn’t where they are hurting. Veselý is an athletic forward, somewhat similar to that Bargani under the basket. With their athleticism, the Raptors could be a uptempo team, and having Veselý would definitely help that.

The Wizards already have JaVale McGee at center, so Biyombo would best be suited taking Andray Blatche’s power forward position. Biyombo is a tough athletic power forward, and could clear the lane for last years’ number one pick, John Wall, while also cleaning up on Walls’ misses. They could also hit up a pick and roll one time, using Biyombo’s athleticism as well as Wall’s quickness.

The Kings definitely would have liked to have Biyombo, because he is willing to do all the things DeMarcus Cousins is too lazy or arrogant to have to do. But alas, the Wizards just picked him to I can’t put him here. Valančiūnas would work because he could fill the center spot Samuel Dalembert is currently filling. Dalembert is a beast, I’ll grant that, but he doesn’t score. Sure, he’ll get you 20 rebounds but in a division with the likeness of the Lakers and Andrew Bynum, you need a center who can score. Valančiūnas can do just that, while also posting comparable rebound numbers.

The days of yesteryear when Rip Hamilton and Chauncey Billups carried the Pistons and became a perennial powerhouse in the east are over. And they desperately need a center. Valančiūnas would work, and if he slips this far, the Pistons would be amazingly stupid not to take him. But he won’t so they won’t have to worry. The next best center, Kanter, would definitely work here too, because he gives them a big presence down low, by adding points and rebounds to their team.

The Bobcats looked like they might have had a chance to actually do something after being the expansion team filling the void left by the Hornets. Gerald Wallace and Raymond Felton finally looked like they were stepping up and becoming decent players, especially compared to former draft busts like Sean May and Adam Morrison. They even got to the playoffs this year, but got kicked out in the first round. But after trading away Wallace and Felton, the Bobcats have holes everywhere, but most notably at the power forward position. Have you even heard of Dante Cunningham? Exactly. I didn’t think so. I think the Cats might consider taking San Diego State’s Kawhi Leonard here, and go with the strategy of getting the best player available, but to fill their biggest hole, they should take Thompson .

Leonard is a big time prospect for the Bucks, who have the jumbled parts to becoming a great team. If Michael Redd will ever stay healthy, this team could become a legitimate powerhouse in the east, paired with Brandon Jennings. Leonard is a raw prospect who has the capacity to learn from the others on the team, while still adding the grittiness, scoring, and tenactiy the team needs.

When the Warriors unloaded their cap space (a hefty sum of $10 million) on David Lee, we all thought that this was finally the answer to all their problems. Finally, a post player to play with Monta Ellis at shooting guard and someone to help Stephen Curry mature and grow coming into the league. Boy were they wrong. Lee has never lived up to their expectations, or his $10 million. And now they need a post presence. One of the worst rebounding teams in the league desperately needs a powerful power forward who isn’t afraid to bang down low and come up with the ball. Markieff Morris has evolved this season into a viable rebounding threat, which is exactly what the Warriors need. He’s still a bit raw, but hopefully he’ll be able to solve the Warriors’ rebounding woes.

Now the Jazz can take their desperate need: a shooting guard. CJ Miles has tried to fill that spot, but really, how much can he really do? Not much. Burks isn’t a pure shooter, but a playmaker. His ability to get to the line is amazing, and he can also slash and get to the hoop. Like most others here, Burks is a raw player and has some weaknesses, however his upside definitely outweighs anything here.

The Suns have two power forwards: Channing Frye and Hakim Warrick, neither of whom deserve to be even considered to start. But, when you trade away Amare Stoudemire, you’re going to be left with some holes to fill. And thats where Motiejūnas can help. While he’s 7 feet tall, he doesnt rebound much, which is okay for PHX. Thats why they have Marcin Gortat (who is 6’11”) or Robin Lopez (who is 7’0”) as their centers. What Motiejūnas can do, though, is score, and score efficiently. He shoots 55.9% from the field and 44% behind the arc. Also, by working out and adding more muscle, he has been able to actually go inside and work in the post, as opposed to simply being a very stretched stretch four.

Ever since Yao got injured, the Rockets have been struggling to find a new star for their team. Tracy McGrady didn’t step up, neither has Kevin Martin, and neither has Luis Scola (but you can’t blame him, he shouldn’t be expected to carry an entire team). So now they’re looking for someone to replace Chase Budinger at small forward. Every other position has a solid player, but the Rockets are looking for someone who can slide from SF to PF and play solid minutes when Budinger or Scola is out. Singleton fits into that slot.

That’s a wrap. Stay on the lookout for the rest of my predictions.