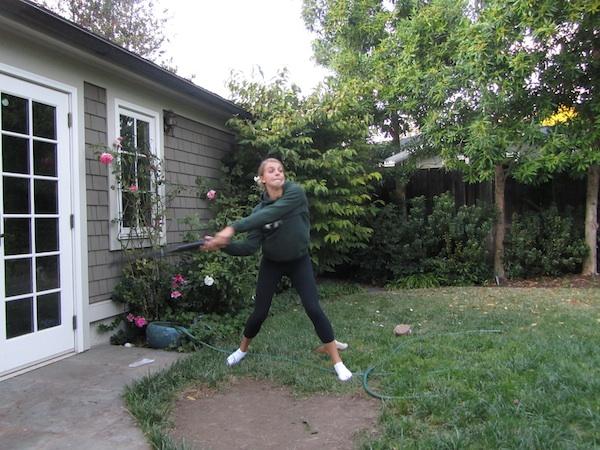 Columnist Shannon Scheel ('12) competes in the rigorous game Shwam in order to relieve the stress burdens of her sporting and academic careers.

To say this week has been stressful is an extreme understatement. I am sure the rest of my peers would concur that based on this past week of school, it has come to the attention of everyone that HEY, school isn’t easy anymore and there is next to no time to relax.

Well, I’ve also had the pleasure of three water polo games this week, two of which we lost in tough, tough battles. To top the weekend off, my dad and I spent literally two hours nitpicking every aspect of my common application before FINALLY hitting submit to two schools. It got to the point where my eyeballs were burning from staring at the screen. And then the AP Psych brain? DO NOT even get me started.

So it was safe to say that I needed a little stress relief. By the time this evening rolled around, I was wearing thin on my math tutoring and nearly fizzled into the oblivion of homework dread. I needed a rebirth, enlightenment, a Buddha. So when I returned home to find Dillon and Kellyn Scheel (my lovely siblings) prancing around my backyard with an upside down baseball bat and ping-pong sized wiffle ball, I couldn’t help but be intrigued.

Now, as most of you know, whooping and hollering is not at all uncommon in the Scheel household. You become quite accustomed to such behavior with a father in the Wildcats, the pan-Palo Alto 70’s and 80’s rock band sensation. But this was something new. Granted, both my siblings probably were teeming with energy due to the fact that they didn’t spend their weekends slaving in the pool or on commonapp.org. Nevertheless, I was desperate to release some tensions from the past few days, and running around like a little kid seemed like the perfect way to do it (as if I don’t act like one everyday….good one).

The game? Shwam, a creation of Palo Alto High School’s class of 2017- Dillon and his band of amigos. It’s a simple concept; a variation on baseball. Essentially, the player batting must start holding the bat upside down and in their opposite hand (I’m right handed so I would have to use my left, for example). The pitcher then launches the miniscule wiffle ball from the “mound”, which is designated only by a line. The pitcher is free to release the ball in any manner he/she chooses, as long as they remain behind the line. The same strike count as baseball stands, but there is no such thing as a walk, which allows a player to take an unlimited number of balls. The more balls thrown by the pitcher, the more the batter gets to adjust his holding of the bat: after four, they bat upside-down with their dominant hand, and by ten they get their normal batting stance back. At this point, however, the batter will be “hitting bombs,” as my brother puts it.

Now caught up on the rules, I couldn’t wait to give it a try. Soon, I remembered why I stopped playing softball all those many moons ago (see photos for my atrocious batting stance) but the thing is? Kelly and Dillon didn’t care. They weren’t critiquing my technique or yelling out in frustration. In fact, they were doing the polar opposite – Kelly was singing a song about running around the bases at the top of her lungs, flailing her arms about and peering at me incredulously with her too-big glasses. And Dillon was mellow as ever. I felt loose, relaxed, and couldn’t stop chuckling.

They say laughter is the best medicine, but they didn’t say anything about stress relief, and they definitely should. After experiencing shwam, I entered my house with yet another life-changing mantra to offer: Sometimes, shelving the stress in our daily lives, whether it be related to sports or not, is a necessity. Remember why we play the games we do —- out of passion, out of a desire to have fun. And if you burn a few calories while getting that stress relief, then hey, even better. And if you aren’t shwaming by next weekend, well, my friend you will. Because I have a feeling this craze is gonna sweep the streets of PA like no other.

So that’s my little anecdote on the spice of life for you today readers. I will guarantee you that I am less stressed right now (crazy, right?). So whether it be shwam, or something else, I HIGHLY recommend you give yourself a little T.L.C.

Until next time…Scheel is out.