I’ve Been Linking… – The Viking Magazine 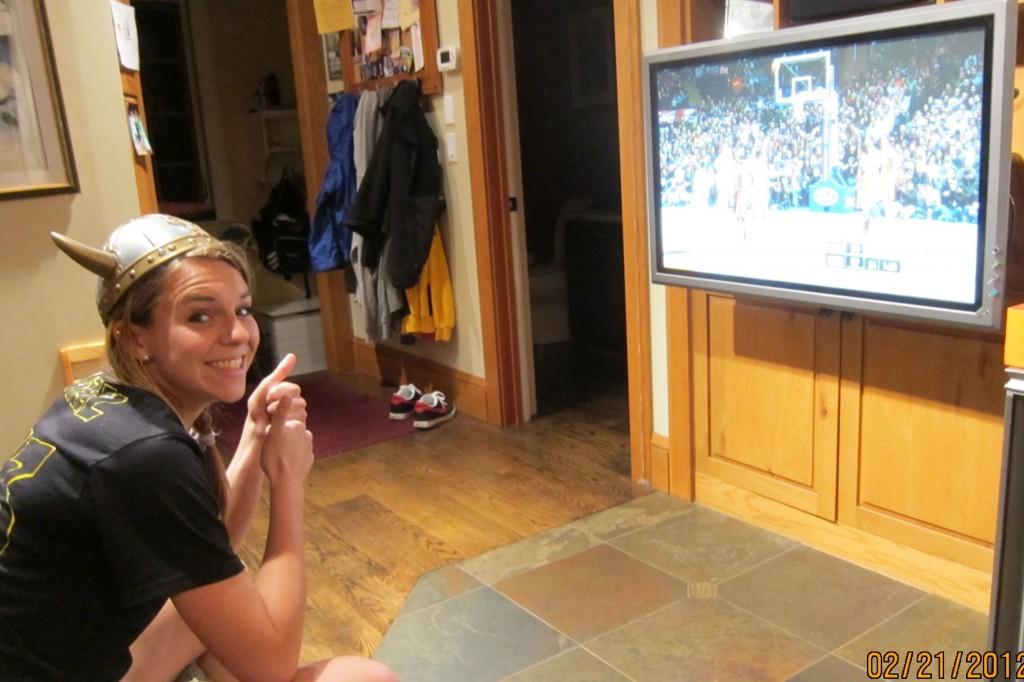 Shannon Scheel (’12) is captivated two nights in a row by Mr. Lin, the new face of the New York Knicks. Her Viking hat shows her school pride!

I watched a live NBA game, two nights in a row. (I know, I know. Don’t faint out of shock or anything.) And I have Jeremy Lin to thank for this monumental moment in my life.

To be honest, I was an NFL girl up until this point in time. Yes, an occasional MLB game here or there, but for me it was largely football and hardly ever basketball (which didn’t sit well with certain people in my life, as you can imagine). Boy, has that ever changed, all thanks to our hometown hero living it up in the Big Apple.

It’s safe to say that, along with the rest of the world, I’ve caught the “Linsanity” bug, and I might need a “linjection” to cure it. Yesterday morning I was glued to the T.V.: Knicks vs. Mavericks. Jeremy, though not the most experienced player on the court by any means, whipped out 28 points, 14 assists and even hit a three right over the seven-foot-tall, league MVP, Dirk Nowitzki. The past two games, Spike Lee wore a Paly Vikings and a Harvard jersey, both repping Lin on the back. Let me tell you, the fact that a Paly Grad is a worldwide sensation (songsation, actually…there’s a rap about him on YouTube) makes me beam with pride. I can’t believe how far our Viking athletes can go! Can’t help but wonder who is next…

But, readers, that is not the only point I wish to bring up. While watching Lin captivate millions of fans, I kept thinking about the other guys riding the bench. Not too long ago, Jeremy was in their position: on the bench, simply waiting for a wave of luck to come his way. It wasn’t his skill that caused Carmelo Anthony’s injury. The yellow brick road of possibilities simply greeted Jeremy, and he seized the opportunity with full force.

Jeremy Lin, Palo Alto High and Harvard grad, is simply proof that any one of these bench-riding players in any major sport could make it big, if given their chance in the spotlight. Yes, there is some discretion as to how motivated the player is, but at the end of the day, each of the drafted players can play basketball. I wonder, readers, if after this Jeremy Lin incident, that professional coaches are going to start considering their bench players a little more. They definitely should, because their roster might have a Lin-derella story of their own. Don’t you think?

Until next time…Scheel is out.