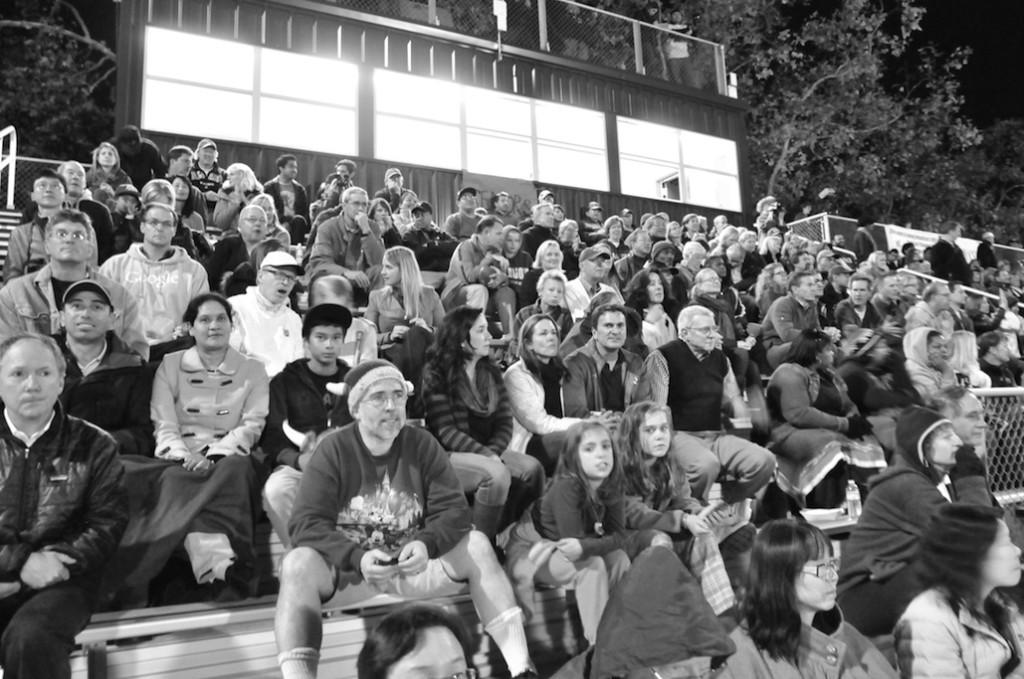 Parents and other fans sit on the bleachers to cheer on the competing players during the Paly Homecoming football game.

Let’s start off with some statistics. Did you know that over 50% of the Palo Alto High School student body is composed of student athletes?

That’s about 950 kids who run, jump, swim, shoot and compete as Paly athletes.

That means there are over a thousand parents who are in one way, shape or form associated with their child’s sports team over the course of the school year. Whether heavily involved or not, these parents make a significant impact on the team.

These parents are separated into distinct groups. Some choose to stay independent of their child’s athletic life and keep to themselves, some choose to volunteer occasionally to help out the team and others insist on being a powerful component of the team. This final group of parents tries to influence the players, coaches, and the overall team atmosphere.

When it comes to parental involvement, there is a fine line that must not be crossed. Parental intrusion in Paly student-athlete territory can be harmful to the team dynamic.

It was time that I examine the good, the bad and the ugly of parental involvement in high school athletic teams: Is it really all that worth it? And how much is too much?

Now, from a financial standpoint, without parental involvement and investments, Paly’s athletic teams would not be thriving the way they are now. Parents bring in a sizeable amount of money to the sports boosters.

In addition to donations, many parents are socially involved with the team, albeit in a reserved fashion. Parents are responsible for organizing team dinners, providing transportation to games and even throwing post-season parties to honor the coaches.

Such actions aid the team and exemplify the appropriate amount of parental involvement in high school sports.

Alas, some parents not only become financially and socially involved, but are also overcome with competitiveness and become emotionally involved in their child’s sport. Parents frequently

attempt to live vicariously through their children.

Though not all students wish to compete in post high school athletics, much is placed on the line for those who do. Many student-athletes continuously await awards, scholarships and college recruitments.

Many motivated parents place a significant amount of pressure on their children through intense additional training and private coaching.

Sure, looking out for your children is necessary and being ambitious for them is encouraged; however, it can at times be over-the-top and can be communicated in a controlling and discouraging manner.

Admit it. There always seems to be that one parent at a sporting event who thinks he or she is an extra coach stuck in the stands. It’s quite noticeable among the other parents who choose to simply sit down to root on their child’s team.

The sole responsibility of any and all coaching should be left to the coaches who are hired by an athletic director or administrator at the start of the season.

Regardless of the parent’s experience with or knowledge of the sport, coaching from the sidelines can be distracting to the athletes playing the game. The athletes’ lack of focus can be detrimental to their success. Conflicting viewpoints can even spark negative relations between the “heavily-involved” parents and the hired coaches.

Along with coaching from the sidelines, some parents seek to actually be a part of the coaching staff. This position, too, should not be tolerated because it will lead to awkward situations between the parent coach and players,.

Athletic director Earl Hansen discussed his views on parental coaching and why it should not be allowed.

“I’m not generally for it…It has happened in a positive way before, but I have also seen favoritism the other way too. If they are a professional coach, it is different than if they are coaching their child on the team for just that one year.”

Parents complaining about coaches is another problem that occurs far too often. Though it depends on the severity of the issue at hand, parents shouldn’t complain about coaches; they’re not actually on the team. Unless they attend practice daily and observe the coach, parents should not be given the opportunity to denounce anyone without valid authority.

The athletes themselves are the ones who should complain if there were to be a serious concern on a particular issue regarding the coaching of the team.

Parents who make derogatory remarks to a coach or to other parents or members of the team are too prevalent in high school sports and are often uncontrollable. This can tear apart a team and ruins the positive relationships built over time between teammates.

Rules pertaining to parental association with a team must be outlined in a parent meeting held before the actual season starts. This will help to prevent any damages done to the team dynamic and the emotional states of the athletes.

A positive environment where parents serve as supportive role models to their children is what is really needed. They must encourage their young athletes to feel confident about themselves and their team’s performance.

So, is parental involvement in high school sports really all that necessary?

To a certain extent, sure.

Are there boundaries that must be set in place?

It is our job as athletes to recognize parents for their continuous effort to support our sports teams. At the same time, it’s important that we encourage parents to separate themselves from the game and to take a step back so the classic ‘tiger parent’ scenario can be avoided.