Since the college scandal’s erruption into the stratosphere, anger among students and parents alike has surged, with a wave of blame striking the implicated most strongly. But we’re missing a central culprit: us. 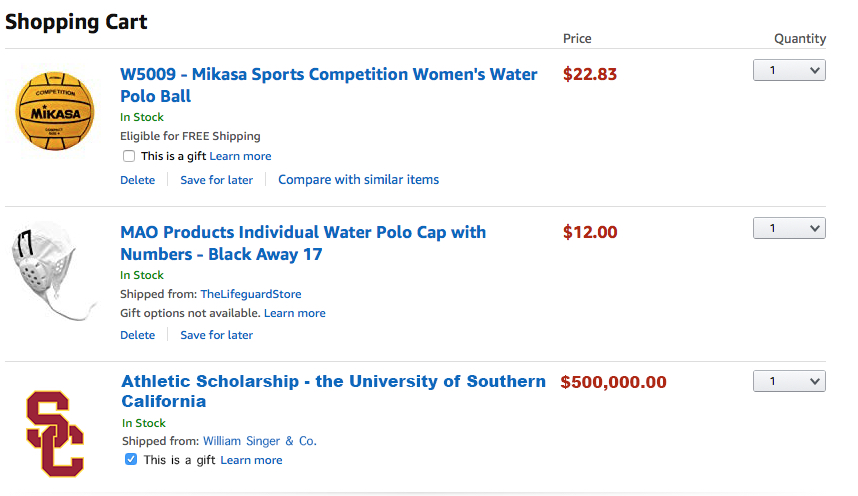 As if bound together, eight people move as one: symmetrically straining against the footplates, forcing the blade of each oar through the shimmering, cold water.

Eyes in the boat!

The sun hasn’t even risen, and the dark night has brought the river temperature to near-freezing. The eerie silence is a stark contrast to the jarring alarm that blared for each of the rowers at 5:00 a.m. They’ll be on the lake for at least an hour or two, rubbing their callused, blistered hands against the wooden oars. Their grip on the oars is so tight that it breaks the skin, revealing bright, rich blood that quickly dissipates. Sometimes, it’s unclear whether the sheen covering their faces is really sweat or tears of exertion. They’ve learned not to pay any mind to their discomfort. The sport breeds it.

The environment is undoubtedly hellish. But no one expresses any pain. No one cares to leave.

Some stay for the camaraderie and competition. Others stay to pursue recruitment.

As seen in her athletic profile, sent to the University of Southern California (USC), Isabella Rose Giannulli had chosen to stay. She had pushed herself to the brink of human endurance. Her hands were blistered and her feet had callused. She had won awards; there were photographs. She was the type of athlete that USC needed. Her athletic promise was clear.

It was all, allegedly, fake.

The sweat was embellished; the leadership was fabricated; the photographs were staged.

On Tuesday, March 13, U.S. Attorney Andrew Lelling and FBI Special Agent Joseph Bonavolonta announced the indictments of 50 people involved in a college admissions bribery scandal the likes of which have never been seen before.

Along with Tuesday’s announcements, nearly all details of this criminal case were released: including a list of indictments and a 204-page affidavit in support of the criminal complaint.

Beginning in 2011, William Singer, alleged mastermind of the scheme, purportedly began taking payments from desperate parents in the form of contributions to the Key Worldwide Foundation, a charity set up by Singer. According to the affidavit, Singer would then pedal this money to college entrance exam proctors and coaches, among others, in order to guarantee acceptance into the nation’s top colleges.

Mossimo Giannulli was one of Singer’s clients.

In an email exchange on July 24, 2016, Singer reportedly advised Giannulli that his older daughter’s academic resume was teetering on the lower end of USC’s admissions standards.

The average student might resign themselves to a different school, or put their head down and work harder to bolster their GPA and class rigor. Giannulli, though, wasn’t an average student, nor did she come from an average family.

During the fall of 2016, the Giannulli family allegedly colluded with Singer to create a fake athletic profile for their eldest daughter.

In the affidavit, FBI Special Agent Laura Smith alleged that “On or about November 28, 2016, CW-1 sent Giannulli confirmation that his daughter had been provisionally admitted to USC based upon ‘records [that] indicate that you have the potential to make a significant contribution to the intercollegiate athletic program . . . .’”

She had, by all accounts, never rowed a day in her life.

While we have chosen to highlight one case of this scheme, it must be said that the same likely occurred for  students at schools across the nation. Dozens of fake athletic profiles were, allegedly, created. Dozens of students were admitted under false pretenses.

We are sick to our stomachs.

The “side door” revealed by Singer purportedly allowed for the admission of a thus-far unknown number of students through the bribing of college coaches. And while the fraud itself is particularly unconscionable, we, as journalists for Viking Magazine, find ourselves compelled to analyze not just this fraud, but the situation that allowed it to be successful.

It must be said that, in the revelation of this case, we have seen the most central tenets of our society trampled, and the trust we have placed in others slain.

To many, Singer may feel like a rather remote figure: a name and face seen only over a single news cycle. As a result, many have quickly painted Singer as another corrupt businessman, one in a long line of those in power who have abused their position for a quick gain.

Thus far, more than a dozen Bay Area parents have been implicated. And although crimes on such a massive scale are normally too disturbing and too remote to point fingers, this one’s easy. This time it’s personal. This time, a culture of corruption was revealed, and so many were thrust into the spotlight.

It must be underscored that these parents have not been unfairly treated. Their actions are unquestionably evil. But in the furor of anger and pain, we’ve defaulted to the easiest targets.

What were they thinking?

Didn’t they know it was illegal?

On what seems like an infinite loop, media outlets have analyzed nearly every angle of the fraud. There is an unequal playing field. Wealthy people did abuse their wealth. We’ve heard it all before.

However, there is one fact that has yet to be explored: the circumstance, built by us, that allowed for this fraud.

We are the ones who, over the course of decades, have held athletes to lower standards than their peers. We have told them that poor grades are acceptable given strong arms and an outlandish vertical. We’ve emphasized wins over GPA: luring athletes towards schools far better than their grades and standardized testing scores could ever legitimize.

We’ve set the benchmarks for sports stars so low that it’s disrespectful to the athletes themselves. But the bigger problem is not just the disrespect towards the athletes; it’s that those same lowered standards create a system prime for exploitation by those who lack the athletic talent, but meet the same academic standards we set for our athletes. A route we designed, designated for truly stellar athletes, has backfired.

The current minimum GPA for members of the National Collegiate Athletic Association is 2.3. Is it right to tell athletes, from their first game under the lights, that they need not strive for academic excellence? That they are more valuable as athletes than students? That same view, those same values, has now allowed the perpetration of the crimes to begin with.

Derrick Rose failed to meet the NCAA’s minimum ACT score on three occasions. Just a few weeks later, he passed the SAT in Detroit. But it wasn’t Rose suffering through the arduous 3-hour process for the fourth time; it was a friend of his who had taken the test in his name.

The score qualified him to play for the Memphis Tigers.

He never had to pay the price.

Memphis, however, was forced to vacate all 38 of their victories from the 2007 season, a punishment exacted on them by the NCAA’s Committee on Infractions. The school took the entirety of the blame and paid the consequences for a crime that wasn’t their fault. While Rose could be blamed, it must also be said that the crime was a product of what Rose had been told his entire life.

We are now the victims of our own creation. A flawed system has been recognized.

Don’t however, take this column as a critique of athletes.

They are not to blame for the abhorrent view of their own capacities. In trying to make the lives of athletes easier, we’ve created a loophole in the admissions process. Athletes that worked extremely hard on their respective sports do deserve a leg-up in the admissions process. However, to those affluent enough, and immoral enough, our system has bred a question with an uncomfortable answer: Why not portray yourself as an athlete?

Those same standards have reared their ugly head in such a public and disgusting way – but really, why are we so surprised?

This was a system that was prime for rigging.

For us, it is easy to imagine a student frustrated by the fact that their own work condemned them to a certain limited scope of colleges while their 4-star recruit classmate with lower grades was looking at offers from Berkeley and Duke.

For us, it is easy to imagine a parent with the ways and means to pay for that 4-star designation.

It must be noted that, throughout history, the super-rich and super-unethical have been the first to exploit any loopholes in our supposedly fair and just systems. However, we have now seen the news media place the blame squarely on the shoulders of individuals doing what they have always done.

What, however, do we do?

We have seen our system, our expectations, tossed to the wayside: trampled by the well-to-do.

And while it’s easy to blame the well-to-do for their actions, we should not waste an opportunity to pass a judgment far more introspective.

But now that the wound isn’t quite as fresh, and the pain not nearly as sharp, we must take time to analyze the system that allowed for this fraud to take place.

It may take months, maybe years, but one day we will forget the perpetrators of this crime. We may not remember the facts as we do now.

This is why it is essential for us to take the time, while we can, to change.

Only we can fix a broken system.