The Great Debate: What makes a good coach? 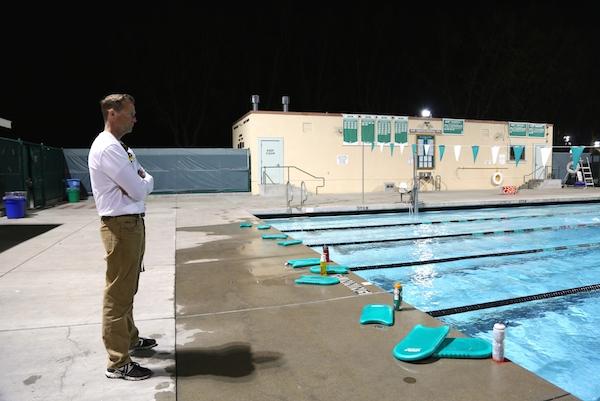 Would you really want a coach that doesn’t push his or her athletes to reach their goals during practice and games? The answer is no. Read on to find out exactly why a strict sports coach encourages competition and helps develop a supportive team.

Motivation. Perseverance. Sportsmanship. These are all qualities that coaches strive to enhance in student-athletes, but how does a coaching style bring athleticism out? Imagine having to wake up every morning when it’s still dark outside and jump in a cold pool or sprint around the track for just one of two practices each day. And just when you think you might give up, your coach is there to step in and firmly tell you that you need to stick it out and wait for the positive results that will come during competitions. How is an athlete supposed to keep up the same, high level of dedication throughout an entire season if the coach doesn’t make a strong effort to push them  to the greatest extent? The answer is, an athlete cannot.

Sure, self-motivation will always be there in true athletes, but it’s also about working harder and longer than what the body is telling you. As both a varsity swimmer and water polo player, I have experienced a multitude of coaches and can firmly attest to the fact that a coach yelling “keep going” during practice and “don’t stop” when my body aches definitely motivates me to sprint faster, egg-beater harder and push off the walls with a greater force. Hell week is a prime example of when a strict coach is necessary, as hearing the words “pain is all in the mind” and “don’t stop or else we’ll start over” is what will prepare me best for the season and increase chances of the team’s success.

Of course, the strict and sometimes harsh communication from coaches seems like the opposite of endearing. But it’s supposed to be. Coaches are given one job: to coach and get the win. Though it is important for coaches to show compassion and make an effort to get to know players, it is not their job to become best friends with everyone on the team. Coaches must be realistic and completely honest about what a specific athlete can achieve and what goals must be set, even when what needs to be said is difficult to hear. This particular coaching style is what will help athletes in the long run.

It is imperative to have a coach who pushes athletes to reach their goals in the right way. Being soft on the players can come across as too easy-going, which therefore prevents athletes from taking the sport seriously and being competitive. A coach is not going to get the respect he/she needs as a leader if he/she is too nice or soft with the athletes.

Being strict should not always be looked at in such a negative light. Instead, it should be viewed as showcasing passion. Showing such strong passion for the sport will be passed on to the teammates, encouraging everyone to work that much harder.

I strongly believe that a strict coach can help bring athletes together and work harder as one unit since everyone on the team is being forcibly encouraged to keep going. As you can see, it is very evident that a strict coach is better for both individual success and team unity.  <<<

How would it feel coming to practice every day scared of what your coach has in store for you? You begin to work hard simply to avoid the wrath of your harsh coach. Read on to find out why a supportive coach fosters a united team.

We’ve all had our fair share of tough coaches who do nothing except bring down the morale and incite anger within a team by yelling at the players. Once one player begins to feel targeted and isolated, the feeling can spread and soon enough everyone will feel frustrated. A coach’s job should be to unite the team and make them work cohesively as a unit, not create tension by shouting at the players.

“Keep working hard. You’ll get it next time. Push through this last sprint, you can do it.” These are the kind of words I prefer to hear on the field – ones that encourage me and make me feel supported. I already have enough worries on my mind while I’m on the field. The last thing I need is feeling like I need to prove myself to my coach.

It’s human nature to want to work hard for someone who believes in you. When a coach yells at you constantly, it can make the players feel as though they are not worthy, which eventually affects their ability to play at the highest level possible.

The true test of an athlete is how hard they work when no one is watching. If the players are just working hard to avoid punishment or avoid being yelled at, that ruins the true spirit of the game and the whole reason we come out to play sports in the first place: because we love the game. The coach shouldn’t have to yell at you to work harder in practice – it’s the players’ own job to push themselves. Having a nice coach who genuinely cares about you and encourages you to work harder for your own good is going to make you better; it’s as plain and simple as that. When coaches use positive reinforcement, it fosters intrinsically motivated athletes who play for reasons far more important than just to to steer clear of the coach’s anger.

The truth is, a coach’s job is so much more than just getting the win, scoring a goal, or rebounding the ball – sports are about more than that in the end. Integrity of the game begins with the coach and coming to practice with fear of your coach’s wrath doesn’t allow players to reach their fullest potential. There’s not much difference between being a coach and being a teacher. Imagine swapping a harsh coach for your math teacher and walking into class each day knowing that some students are going to be belittled and embarrassed by the teacher because they didn’t know the answer or made a mistake in their calculation. Would anyone think that style of teaching is effective?

After playing volleyball, water polo and lacrosse at Paly, and experiencing a wide range of different coaching styles, I can thoroughly testify that when the coach makes the players feel valued, the team is closer and is able to work together in a more effective manner. Positive coaches are able to truly unite the team as a whole, and those are the kind of teams you remember years and years after the season is over. <<<