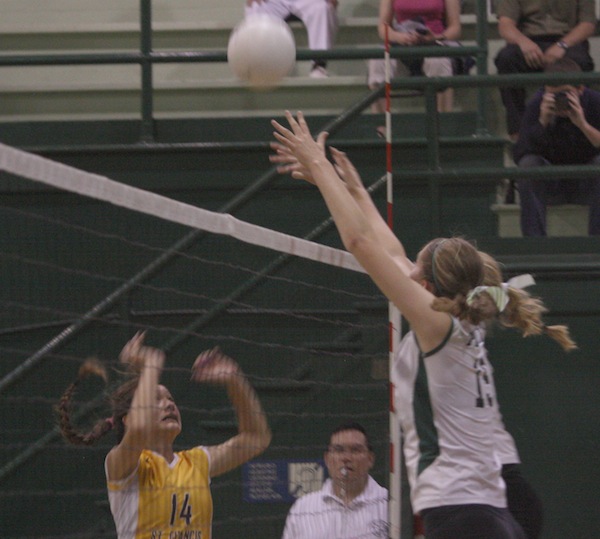 Jump to Comments
Share on Facebook
Share on Twitter
Share via Email
Print
Coming in to this volleyball game against St. Francis High School (11-2, 0-0), Palo Alto High School (15-2, 2-0) knew this would be a tough match. Both teams won a state championship last year; the Vikings took the CIF Division I Volleyball State Championship and the Lancers took Division II. The Lady Vikes pushed through, bringing this match to five sets, but fell short in the end.David Winn, head coach for Palo Alto came into this game hoping it would be a good learning experience for the girls.

“I was hoping we would do a lot of learning and that this would be a true test of what we need to work on and improve,” Winn said.

Starting off the match, St. Francis got the first point in the first set and quickly started to get control. Using two timeouts, Winn tried to get Paly back on track and focused, but the Vikings could not seem to get that momentum going, losing their first set 20-25.

“I wanted to make sure we were going to pull points and do something good,” Winn said.Although the Lancers got the first point of the second set, the Vikings gained their momentum when captain Maddie Kuppe (‘12) had a key kill which led to Paly getting a small lead over St. Francis. However, it wasn’t long before they began to rally back and forth for several points. After the game was tied at 19-19, Paly was able to pull through a little bit and get a small lead, but the points soon began to rally back and forth again. After many long rallies St. Francis won the second set 28-26, leaving Paly a few points short.

“I didn’t want them to focus on the fact that they gave up a set,” Winn said. “I told them, if you take your foot of the pedal, the other team is going to catch you.”

Kimmy Whitson (‘12), the starting setter for Palo Alto, said the main problem in this set was finishing.

Pumped up by their coach’s words of wisdom, the Paly girls gained control of the third set fairly quickly by winning a long rally. The Vikings never gave up their early lead and finished the set strong when key player Wade got the game winning hit, finishing the set 25-19.

The fourth set started off a lot like the second set with a small lead in the beginning for Paly and surely enough, like in the second set, the points began to rally back and forth between the two teams. Although Paly gained a small lead, St. Francis kept pushing and the momentum stayed high for both teams. St. Francis kept it very close, slowly decreasing Paly’s lead, but the Lady Vikes were able to pull through winning the set 25-22.

“We just wanted to play well and improve, and I think we did that in the third and fourth sets,” Wade said.

With hearts racing, both teams stepped onto the court for the fifth and final set, each with an equal chance of taking this victory home. St. Francis got an early lead, staying ahead by about five points throughout the set. After a Palo Alto timeout, instead of gaining back focus, Paly began to get more and more scattered, giving St. Francis a chance increase their lead.

“In the fifth set we always try to eliminate our errors, but I think everyone was kind of flustered,” Whitson said.

However, in the last couple of points of the match, Paly remained in the game 100 percent, giving it their all and fighting until the end. But the early St. Francis lead came back to bite them, giving the Lancers a win of 15-8 in the final set and 3-2 overall victory.

“Tonight, I was kind of hoping for a five set match and we got it,” Winn said. “We came up with the short end of the stick, but we did a lot of learning.”

Even though, the Lady Vikes’ lost this important game, they keep their heads high and look at the brighter side of the situation.

“Our strength was definitely not giving up,” Whitson said. “We could have fallen over and died after the first two sets and given up in three games but we definitely kept our focus and held onto our energy.”

Looking forward, the Paly girls see this as a learning experience for upcoming games.

“I have no regrets, and the only thing we can do about it now is learn from it,” Wade said. “We learned that we always need to be pushing the entire time [against] the opponent.”

The Vikings face Los Gatos in the main gym this Thursday at 5:30 p.m.

One Response to “Volleyball loses to St. Francis in five games”