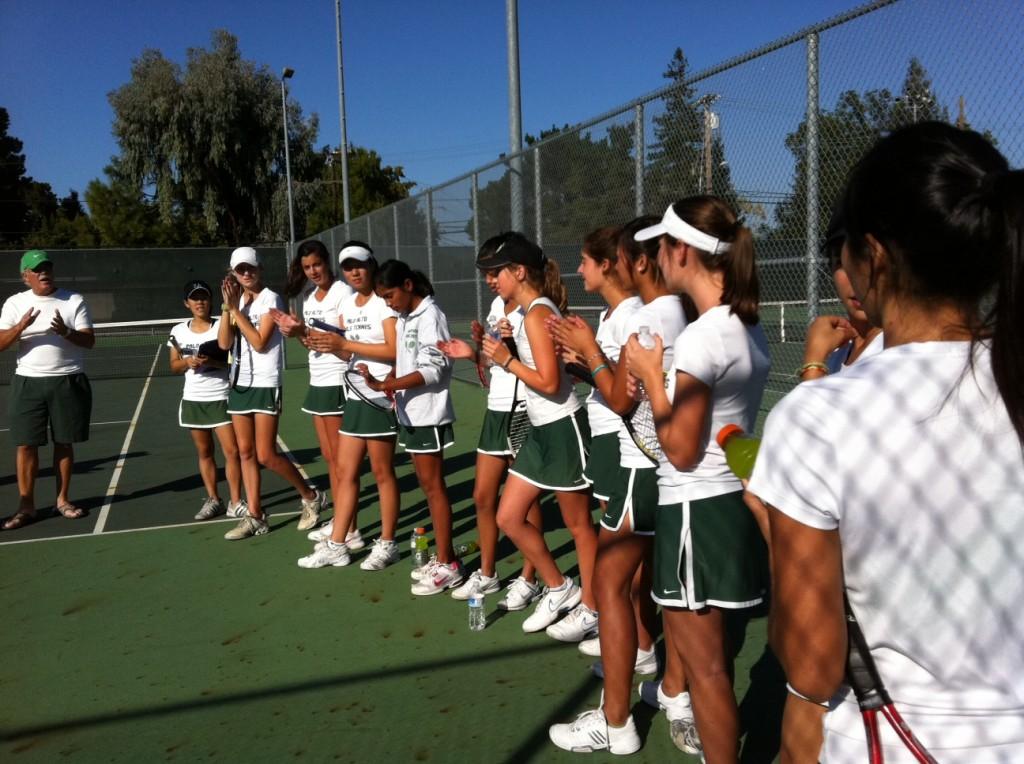 Set to tall shadows and dissonant chords, the Palo Alto High School girls’ tennis team lost in a close match to Los Altos 3-4. No. 1 single Aashli Budhiraja (’14) defaulted mid-second set due to a leg injury that caused her to lose her last seven games straight.

“I just kept the ball in,” Wang said. “I like long rallies so when we had long rallies it felt more intense and fun.”

“Getting my serves in – that was what I was really focused on when I was up because that’s what I really need to improve on and be consistent [on],” Wang said.

Ke and Kool set the day’s doubles’ standard with many tight, quick rallies but eventually lost footing due to numerous unforced errors. Notable was a long rally in the third set, in which Ke lobbed three shots and Kool returned many strong shots of her own. Unfortunately, Paly lost the point because of an unforced error after Kouvelas slid to mid-court to return a shot.

“I think we started out real strong – we were really good in practice but we started getting lazy in the second set and in the third set we couldn’t come back,” Ke said. “We fought hard, though.”

Paly head coach Andy Harader felt that the girls needed to keep up with consistency.

“I think the [Paly] doubles didn’t play up to par today because last time we played them they beat us, pretty badly,” Nguyen said. “On the injury to No. 1 – it would have been a good match between Aashli and Kasey [Incerpi].”

The team continues working toward its goal of qualifying for Central Coast Section Championships (CCS) in November.

“My goal is to get into CCS individuals, since Aashli and I will be playing No. 1 doubles, and it will be a good experience for us, since I’ve never been to CCS as an individual,” Wang said.

Paly plays Gunn next wednesday at the Paly tennis courts at 3:30.

“We’ll definitely be pumped up to play Gunn because we’re rivals,” Nguyen sad.