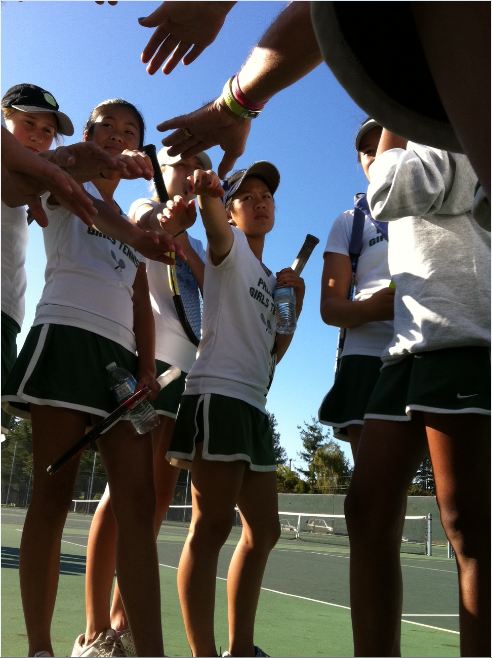 The girls put their hands in for their prematch P-A-L-O-A-L-T-O cheer at a Oct. 20 game against Los Altos.

The Palo Alto girls’ tennis team ended its 2011 season with a loss from its two lone Central Coast Section (CCS) qualifiers, No. 1 single Aashli Budhiraja (’14) and No. 2 single Felicia Wang (’14).

This year, Budhiraja and Wang played as partners on a doubles team in CCS, contrary to their singles playing for the whole of the season. They won their first match against Cori Sidell and Christine Tataru from Carlmont High School 6-4, 6-4, but ended their run in the tournament after losing their second match to Monta Vista’s Kelsey Chong and Ruri Kobayakawas 2-6, 0-6.

Budhiraja and Wang played against Chong and Kobayakawas in the Santa Clara Valley Athletic League (SCVAL) tournament, but were still unable to secure a win against the top-seeded duo in the SCVAL individual tournament.

With only one senior, Amy Ke (’12) graduating, the team hopes to perform better next year.