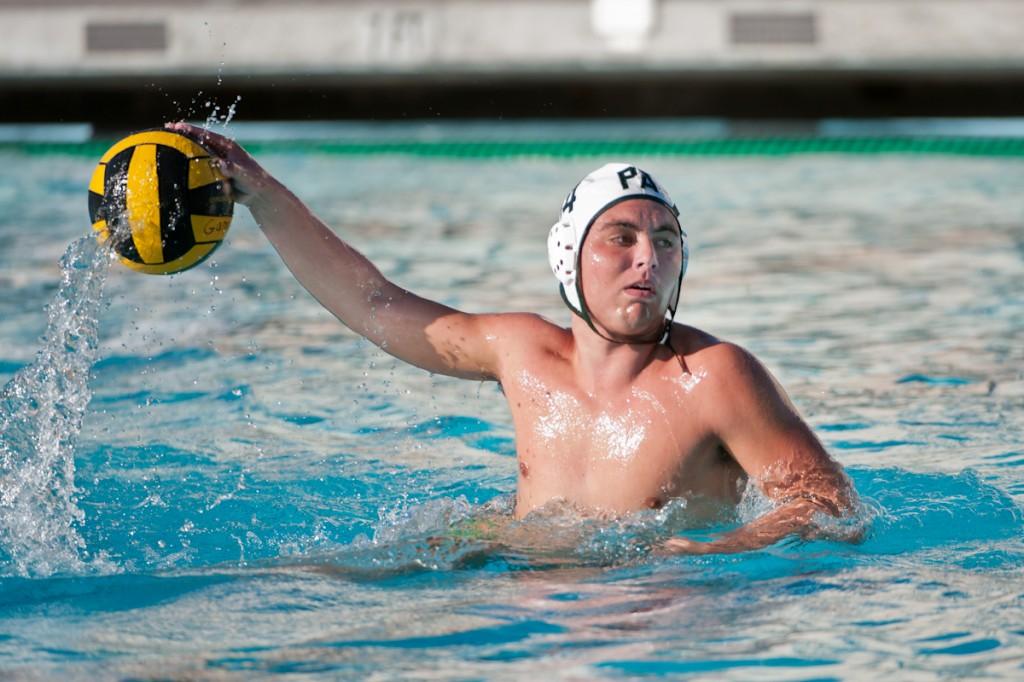 Brett Pinsker (’13) sets up for a shot. Pinkser led the Vikings with a total of five goals.

The Vikings started strong by winning the sprint and quickly powering down the length of the pool. Nolan Perla-Ward (‘13) set the tone early in the game by scoring the first goal off a cross by Bret Pinsker (‘13). Pinsker then scored from two meters, bringing the score to 2-0. Goalie Brent Schroder (‘13) made four saves to keep the Vikes in the lead. Los Gatos finally managed to put one by Schroder, but he quickly came back on the next play with another save. A last goal in the first quarter by Los Gatos brought the score to 2-2.

“I don’t think we got a very good warm up first of all, but after that I was really happy with how we played the second quarter,” Schroder said.

During the second quarter, Paly started out strong by winning the sprint again and utilizing the advantage of being a man up to score the first goal of the second quarter off a shot by Perla-Ward. Paly continued to score when Pinsker used a break away to his advantage and scored, making the score 4-2. The next three goals for Paly were scored by Perla-Ward  with one, and Pinsker with two, furthering the Vikings’ lead. A goal by Los Gatos brought the score to 7-3, and a blocked shot by Schroder ended the second quarter.

The third quarter began with a save by goalie Jake Weinstein (‘14). After two made penalty shots by Pinsker, Paly increased its lead to 9-3. Paly kept its lead for the rest of the quarter with two saves by Weinstein and a goal by Brian Berry (‘13). Los Gatos managed to score a goal at the end of the quarter, making the score 10-4.

Even though Paly won the starting sprint, Los Gatos came back with a quick goal. Paly retaliated with a goal by J.J. Kadifa (‘14), and Gatos responded with another goal. With the score at 11-6, both teams continued to shoot but Weinstein kept steady, allowing only one more goal. Paly soon came back with a goal by Scott Powell (‘14) with 20 seconds left on the clock, ending the game with a final score of 12-7.

“We thought it was a really good game,” coach Brandon Johnson said. “The first quarter was a little tight and then we pulled it out and started playing a lot better.”

The Vikings have an upcoming tournament this Friday and Saturday.

“It’s a really tough tournament, there’s a lot of good teams,” Johnson said. “We’re co-hosting so we have two home games tomorrow but there’s some very good competition so it’ll be a good test for us and hopefully we do well.”

The Vikings will be playing in the Roch Tournament this Friday and Saturday at Menlo High School and Palo Alto High School.