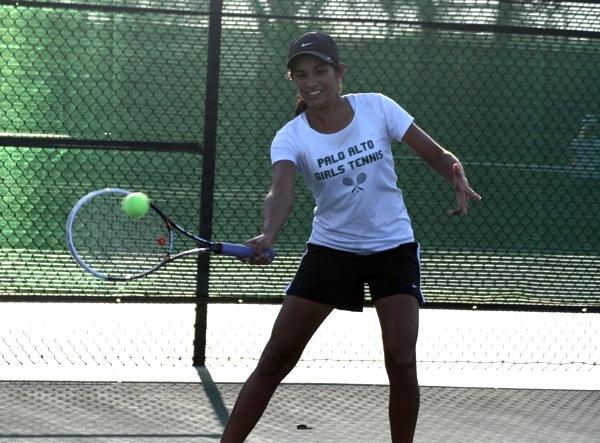 In their previous match against Mountain View, they were able to get a smooth 6-1 victory but coming into today’s match, the Lady Vikes expected to have an aggressive match.

“The strategy [coming into today’s match] is just to play well and use the same kind of lineup which is what we did” coach Andy Harader said about his game plan for the match.

Although the team won this match-up, some of the players faced challenges in today’s match that were not felt in the first match. Mountain View proceeded to play their number two and three singles players at one doubles.

“I knew that was going to be really challenging for our number one doubles team [Tiffany Nguyen (’13) and Julianne Le (’14)]” said Coach Harader in response to the somewhat unusual tactical move by Mountain View.

Nguyen and Le had a tough match against the number one and two singles players Polina Gorshenina and Sheila Ani. After losing the first set 4-6, Nguyen and Le were down 2-3 in the second but fought back and won two games in a row to give them a good shot at splitting sets. The match however turned back around, giving Gorshenina and Ani won all three games in a row to take the match.

Number two singles player Felicia Wang (’14) took on her opponent as she breezed through the number one doubles player, Stephanie Lin. Wang’s strokes were solid and didn’t go for many risky shots throughout the match.

In the meantime, number one singles player Aashli Budhiraja (’14) took on Vivian Li and won the match 6-1, 6-1. With her match done Budhiraja is focused on tomorrow’s match against Carlmont. Budhiraja shared her feelings about the team.

“I’m playing someone I know pretty well” Budhiraja said. “We’ve played doubles together a couple times too. I’m really looking forward to a tough match tomorrow. As far as the team goes, I have honestly no idea what to expect because we’ve never played them before.” Budhiraja added.

Harader, as well as the team, looks to play more competitively in future matches as well as tomorrow’s match at Carlmont.