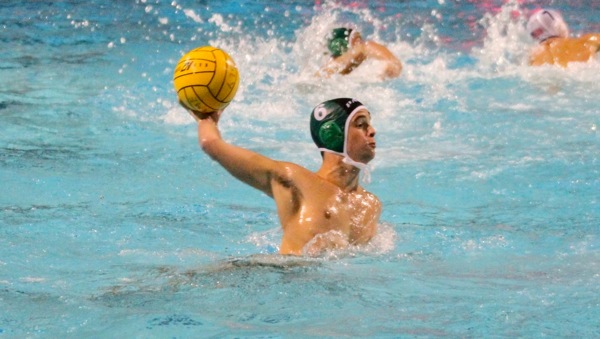 On a chilly Tuesday evening under the pool lights, the Palo Alto High School boys’ varsity water polo team fell short to Los Altos, 12-11 in overtime. The stands were filled with parents, cheerleaders and fellow Paly students, who came out to support the six seniors in their last home game.

From the start of the game, the Vikings and Eagles were neck and neck. Brian Berry (‘13) scored the first goal of the night for the Vikings. However, with strong defense from the Eagles, the Vikings missed several other opportunities to score. With a couple turnovers on attack by the Vikings, the Eagles were able to score, tying up the game at 1-1 to end the first quarter.

In the second quarter, the Vikings had trouble keeping possession on attack, giving Los Altos an easy breakaway shot. In an attempt to get the point back, Michael Kori (‘13) passed the ball to Nolan Perla-Ward (‘13) for an open shot, tieing up the score. However Los Altos countered, racking up a few goals. With 22 seconds left on the clock, Bret Pinsker (’13) threw a fake and successfully scored the last goal of the second quarter leaving the score to 4-3.

In a tense third quarter, Pinsker made a pass to Quinn Rockwell (‘13), who made his signature tip shot for an easy goal to close the gap to 5-6. Looking to tie up the game, Lucas Novak (‘15) assisted Sam Kelly (‘14) in a power shot to tie the score at 6-6. As Paly was slowly losing their momentum, Los Altos once again was able to score two more goals before the end of the third quarter, giving them an 8-6 lead over the Vikings.

In a tight fourth quarter, the Eagles began to dominate on attack, scoring two more goals. With multiple possessions, the Vikings could not seem find the back of the net. Looking to get some points back, Pinsker, Christian Laztnsch (‘14), and Andrew Cho (‘15) scored for the Vikings. With 42 seconds left on the clock, and the Vikings down by one, Pinsker scored yet another goal to tie up the score at 10-10.

Going into two, three minute overtime periods, Paly started off on a dominant note, gaining possession. However, they  could not seem to find the back of the net with the Los Altos goalkeeper saving a number of their shots. The Eagles scored the last goal of the first overtime leaving Paly down by one.

Thirty seconds into the second overtime period, the Eagles scored once again giving them a two-point lead over the Vikings.  With limited time remaining, Pinsker countered with a goal, bringing the score to 12-11. Looking to tie the game up once again, Paly was able to gain possession and with only eight seconds left, Pinsker attempted a goal, that was blocked by the Eagles’ goalkeeper.

As the overtime came to an end, however, the Vikings did not get out of the pool as the officials were discussing a controversial and possibly game changing call of whether the Vikings should receive a few extra seconds, as malfunctions with the clock may have occurred.

With the Vikings refusing to get out of the pool and the Eagles already in their robes, the officials did not give the Vikings the last few seconds, leaving the team with a devastating loss.

Although an adverse loss, the Paly Vikings were pleased with their overall performance.

“[The Vikings] played great, they showed a lot of heart,” coach Brandon Johnson said. “We were down like four goals with three and a half minutes left, we came back and tied it, I thought they played great.”

“I think we played great as team, it just came down to the little things, but it was a close game, we are both pretty even teams,” Rockwell said.

The Vikings will take on cross-town rival Gunn this Thursday, October 26th at Gunn High School.