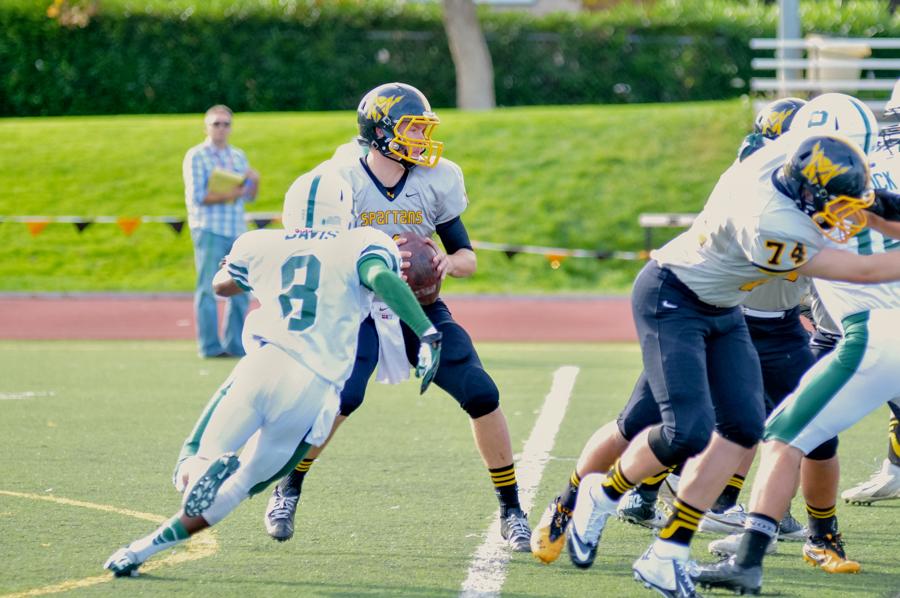 Malcom Davis ('14) hunts down the Spartan's quarterback, in a stout performace by the Paly defense. Paly prevailed, 56-28.

Paly football brought an offensive show to Spartan Stadium on Friday afternoon, winning 56-28 and advancing to 7-2 (6-1 league) in a game where Justin Gates Mouton (’13) recorded three touchdowns and Matt Tolbert reached 1,000 yards on the season.

On the opening kickoff, Justin Gates-Mouton returned the kick for six Paly points. However, it was called back on a holding penalty.

No problem for Gates though, who took an outside sweep play for a 75-yard touchdown on Paly’s first offensive possession. Only a few seconds into the game, Paly was up 7-0.

Paly’s defense got off to a hot start too, forcing a Mountain View three and out. The Spartans’ punt fell less than 15 yards downfield, a recurring issue for Mountain View’s special teams.

Courtesy of the bad punt, Paly’s offense set up at the Spartan 40-yard line and went right to work.

Keller Chryst (‘14) spread the ball to multiple receivers for short, quick gains throughout the drive, but it was Gates-Mouton, who capped off the drive with a 15-yard touchdown run. Palo Alto, already establishing the tone of the game, went up 14-0 less than five minutes into the game.

As the Spartans took the field again, they failed to come up with any answers for the Vikings’ defense, as Larry Allen (13’) came up with a sack on third down, again sending the Spartan’s offense back to the sidelines after just three plays.

After another Mountain View punt, Paly set up shop at the Spartan’s 40-yard line again. The Vikes struggled to methodically move the ball down the field in a drive plagued by penalties and blown-up plays. Eventually the offense reached the four yard line, where the Spartans stiffened up and shut down the Paly offense three plays in a row.

Coach Hansen and staff decided to go for it on fourth and goal, and were rewarded for the gutsy choice. Matt Tolbert (‘13) rumbled into the end zone for yet another Paly touchdown. James Foug (‘13), perfect throughout the game so far, completed the PAT attempt. The Vikings’ lead grew to 21-0 with 3:08 left in the first quarter.

The struggling Mountain View offense faced another three and out, as Paly’s defense stayed relentless throughout the first half and did not allow the Spartans to score.

On the following Paly drive, it was the Vikings who found themselves struggling on offense. Grinding their way up the field, Chryst and crew found themselves in a fourth and long on the Spartans 25. The Vikings went for it, but a dropped Chryst pass set the Spartan offense up where the Vikes had left off. Once again, Mountain View failed to move the ball.

Paly received the punt with only a few minutes remaining in the half. Wasting no time, Matt Tolbert broke out for a 75-yard, highlight-reel-worthy run to put Paly up 28-0 and eclipse the 1,000 yard rushing mark for the season.

The stout Paly defense shut the Spartan offense down, but with :40 to go in the half and the ball in Paly hands, Justin Gates fumbled and Mountain View returned it for a touchdown. The Spartans tacked on a two point conversion. The half ended with Paly up 35-8.

Paly remained strong and continued to roll in the second half, despite a Mountain View comeback where the Spartans added 20 points. Paly topped that with an additional 21 points for a final score of 56-28.

Head coach, Earl Hansen was rather disappointed with all the points Mountain View added in the second half.

“I think we started the way we wanted to start, we moved the ball well,” Hansen said. “It just ended as a sloppy game.”

The Vikings will take on the Santa Clara Bruins in the last game of the season next week.

“We’re gonna have everyone involved, scout teams, first teams,” lineman Drew Rider said. “We’re all going to lock in and try to make practice as efficient and easy as possible.”

The Vikings will travel to Santa Clara for the last game of the regular season, hoping for a win to lock up a playoff spot.