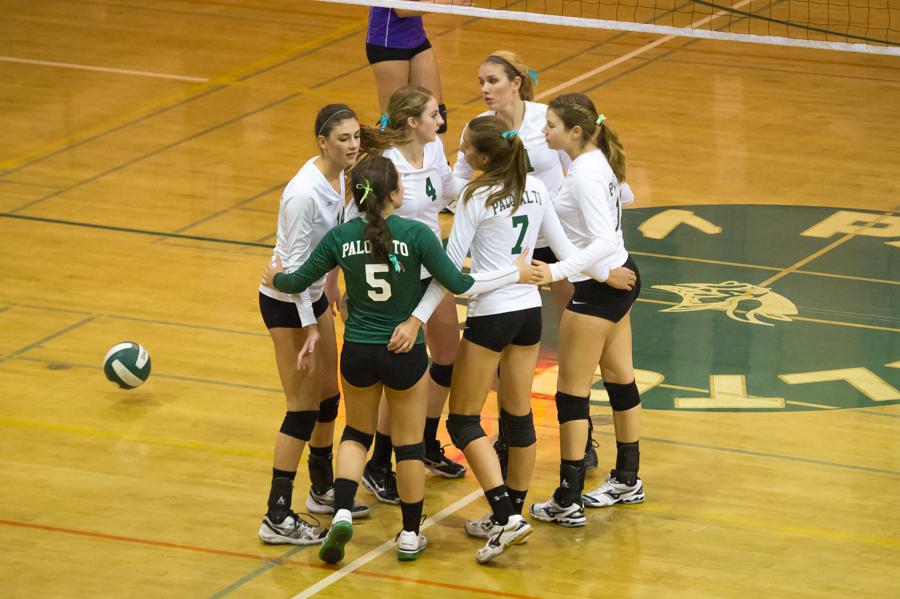 The loss knocks the top seeded Vikings out of the Division 1 CCS tournament and ends their season.  The defeat also officially puts an end to the possibility of Paly winning an unprecedented three state titles in as many years.

Paly was undefeated against Homestead this season, beating the Mustangs all three times they met.  The two teams also shared the Santa Clara Athletic League title this year. However, Homestead, the fourth seed in the tournament managed to top the Vikes when it mattered most to advance to the finals of CCS and the NorCal preliminaries, a tournament that establishes the Northern Californian representative in the state championship.

The loss also marks the last time co-captains Shelby Knowles (‘13) and Sophia Bono (‘13) will ever play in Viking uniforms. The two were both members of the back-to-back state championship teams and are the only players who will graduate from this year’s squad.

Although his girls did lose the match, Winn still believes that his team, which graduated eight seniors after last season, did surprisingly well this year.

“I think we overachieved,” Winn said. “My expectations were that we would continue the tradition we had built over the past few years and have a lot of fun.”

The first set began evenly matched with the Mustangs and Lady Vikes trading points. In the first set, Knowles had seven kills, but got nearly no help from her teammates.  Fellow outside hitter Becca Raffel (’14) was forced to leave the game due to an illness she had been battling for the last four days, and this apparent lack of firepower left the door wide open for Homestead. Mustang stand-out Emily Reed (‘13) took over, slamming kill after kill until her team won a tight first set 25-20.

Nonetheless, it appeared Paly would respond after it jumped out to a quick 6-2 lead behind stellar serving by Knowles in the second set. The lead, however, wasn’t big enough, for the Mustangs proved to be resilient and fought back behind Reed to take a 21-17 lead.  Paly responded with a run of its own, going on a 3-0 rally to pull within one.  At one point Paly led 24-23 and had a chance to take the set but failed to do so. Three unforced errors and the firepower of Homestead’s Reed allowed the Mustangs to edge out the Lady Vikes in the second set, 27-25.

Paly began its third set strong as well, leading Homestead 10-3 after a kill by outside hitter Anna Dukovic (‘15).  However, after a 7-1 streak by Homestead due to missed hits and Homestead aces, the Mustangs began to dominate. The last moments of the match seemed to be very evenly matched with multiple long rallies that favored Homestead. The Mustangs took the Lady Vikes’ final set of the season 25-17.

Paly is only graduating two seniors and will be led by Raffel and libero Keri Gee (’14) next season.

Although her season ended in an emotional upset, Bono still has a positive outlook on her Paly volleyball experience.

“Dave always says carpe diem, sieze the day,” Bono said. “It’s hard to do every day when you wake up and kind of think about it, but I think it’s a really good lesson and I am going to use it in the future.”