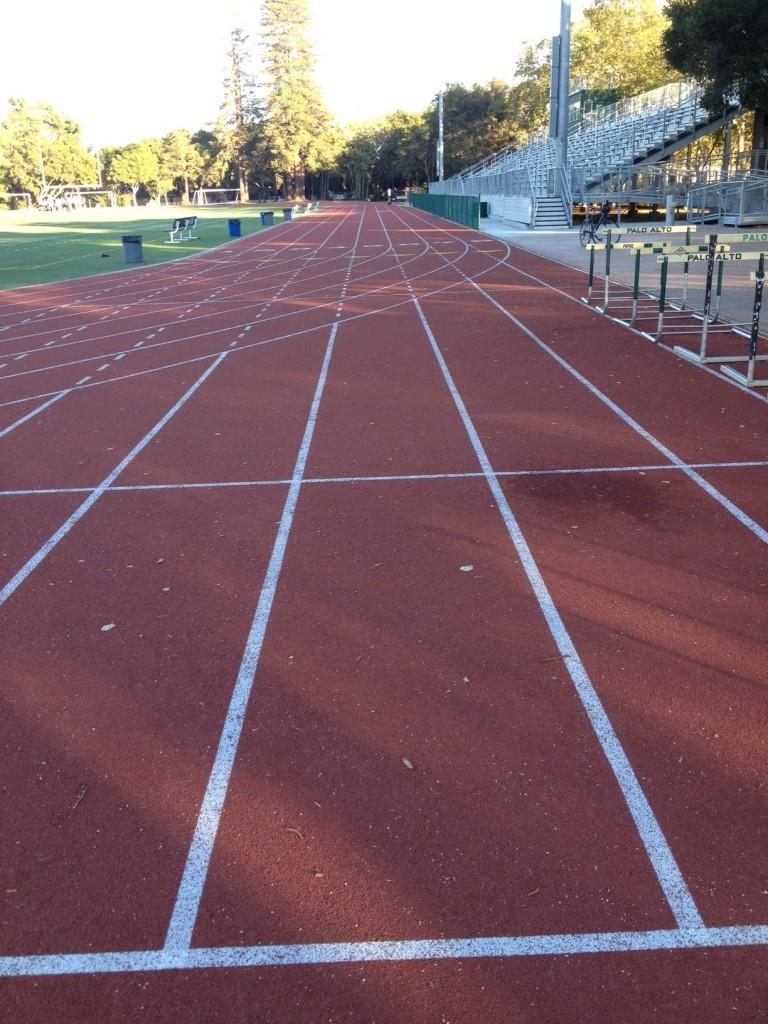 One of the straightaways on the Paly track sits unused late in the day. During the summer, workers resurfaced the track and finished jump pits, completing the football stadium remodel.

Work crews at Paly finished remodeling the football stadium this summer, completing the work that began near the start of last year, and was voted on back in 2008 as part of Palo Alto Unified School District’s Strong Schools Bond.

Much of the work on the bleachers and snack shack area, including new bathrooms and a new press box, ended last spring. Because of this, the main work over the summer constituted resurfacing the track and finishing up the jump pits.

The track now has written markings for all non-relay events as well as starting marks for the 800m. Additionally, the stadium remodel included the completion of new jump pits. The pits had been in the making for the entirety of last year’s track season, as mentioned in last year’s story, Life Under the Sand.

The pits came complete with covers that keep sand in and debris out. In the past, the pits had been less than full with sand and often covered with leaves. The newly implemented covers should keep the pits clean for years to come.

Amongst Paly sports teams, the track and field team will see the largest changes from the stadium remodel. Last year, the team did not have a single home meet, due to the lack of useable jump pits. This made the long jump and triple jump events impossible to perform.

“Anytime you have to travel for six meets, it’s a tough road,” Fung said.

With the new pits, the jumpers on the track and field team will now also get a chance to practice.

“Practice is the key to jumping,” Fung said. Having the pits and being able to do drills in the pits and the sand is going to be crucial.”

While other Paly sports teams that play on the football field will not benefit directly from the stadium remodel, fans definitely will. New home and visitor bleachers give fans more seating choices. In addition, new fences and gates will help with security problems.

Paly athletes seem to be happy with the results of the remodel.

“I think they did a pretty good job, it looks way better than last year” Eli Givens (‘16), a returning member of the varsity track and field team said. “I’m excited to start running on [the track]”

Givens is also a member of the this year’s varsity football team, which is excited about the new stadium.

“We’re hyped up about the new bleachers, the new scoreboard, and we’re excited to play [in the new stadium],” Givens said.

“Very good job, from what I’ve noticed,” Fung said. “They missed one line, but they’ll come back and get it”.

With the new stadium completed, Paly’s numerous sports teams that play in it look to showcase their talent this coming year in improved facilities.