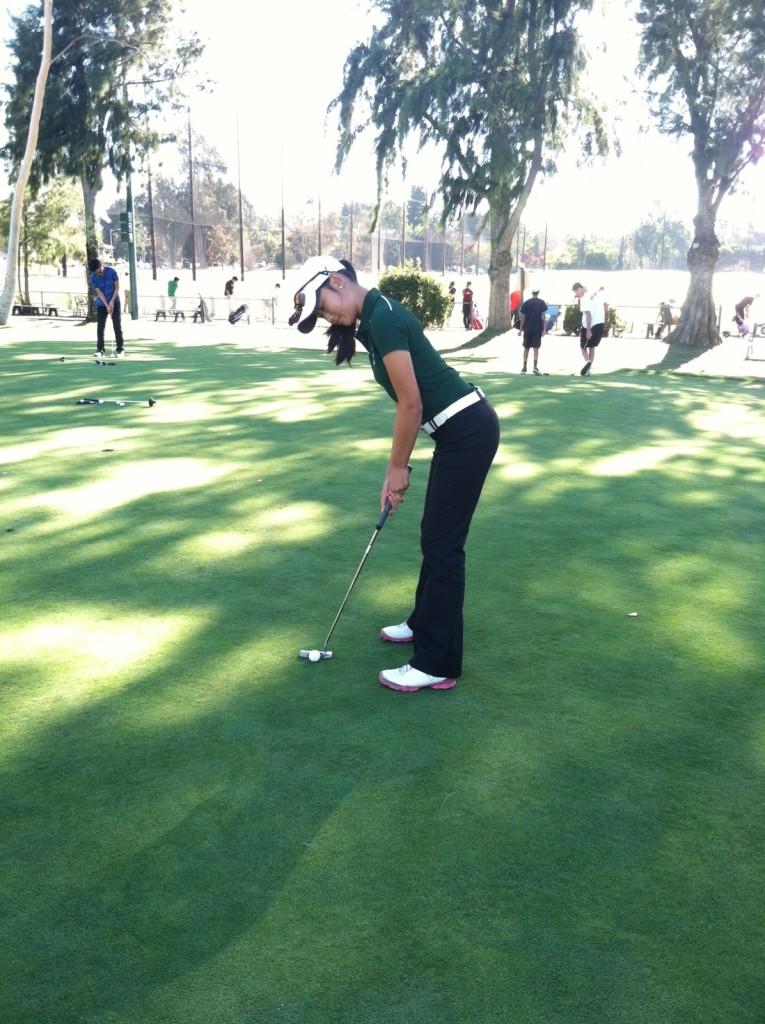 Michelle Xie ('15) putts during practice. Xie is one of the two captains of the team this year.

Players on the Palo Alto High School girls’ golf team are preparing for their first season as a Paly sport.  Paly has only had a co-ed golf team in the past, which mostly consisted of boys.  This year, the girls get their own team.

Many girls who previously played outside of school are now able to play for the Vikings without having to worry about playing on the same team as the boys.

“It’s kind of intimidating coming into matches when you are the only girl there,” Michelle Xie (’15) said.  “Now that it’s all girls, we all [feel] welcome.”

The team consists of nine players, only two of whom have played golf for Paly in the past.  Even with the majority of the roster consisting of new Paly players, the team has high hopes for this season.

“I have been talking to the coaches to see what’s a good score, and we’re way below those scores,” coach Doyle Knight said.

This season, the team is led by captains Xie and Annie Chen (’14),  both of whom played on the co-ed team last year.

The team is made up of many younger players this year, consisting of two seniors, three juniors and four freshmen.  The coach was pleasantly surprised with all the talent the team has this year.

With so many good players, Paly expects to have a good first season.

“Looking at averages and scores of other teams that have played before and concerning the couple rounds that our team has played together I think we can play pretty well,” Xie said.

One of the biggest challenges the team will face this year is beating cross-town rival Gunn High School.

Gunn went undefeated last year and finished second in CCS, so the Paly team hopes to use their depth to pull off the win.

“We’re going to give Gunn a run for their money,” Knight said.

The Lady Vikes will play a total of 14 matches this year, playing every other team in the league twice.

The teams first league match is today against Los Gatos.