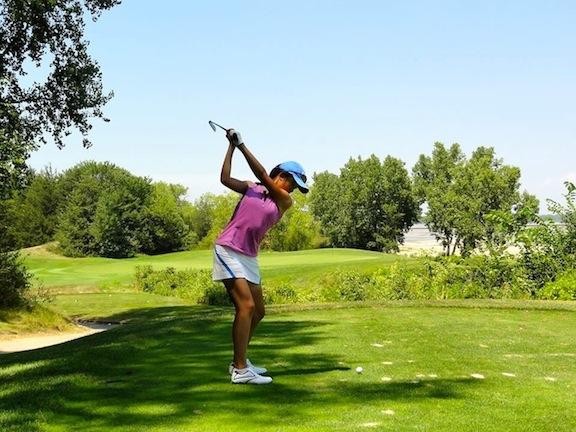 Michelle Xie ('15) prepares for a shot. Paly Girls' Golf went on to win CCS against Saint Francis Lancers by a close four shots.

Paly girls’ golf won the Central Coast Section (CCS) tournament this afternoon with a winning score of 391. They beat St. Francis by a close four shots, and Gunn by 21 shots.

“I think we did pretty well,” captain Michelle Xie (’15) said. “I know that we didn’t play our absolute best… but we pulled it together.”

Xie shot a 69, the lowest score in the whole tournament.

This is the girls’ golf team’s first season ever, and the first time winning CCS.

“It’s good that we won CCS, because we were a little down after losing leagues by two to Gunn,” Xie said. “Being able to come back for CCS is pretty awesome, considering CCS is the next level and is the bigger level.”

The team will next continue on to the CIF tournament. Xie knows that they can do well despite a more challenging course.

“The course is getting harder,” Xie said. “Today’s was a bit harder than leagues, and [CIF’s] will be even tougher, so we have to go out there and make sure everything stays in place.”

Xie looks forward to CIF and hopefully making it to states, if they place in the top three.

“We’re just hoping to be able to make it to states because our team is really strong this year,” Xie said.

The Lady Vikes will play in CIF  November 4.