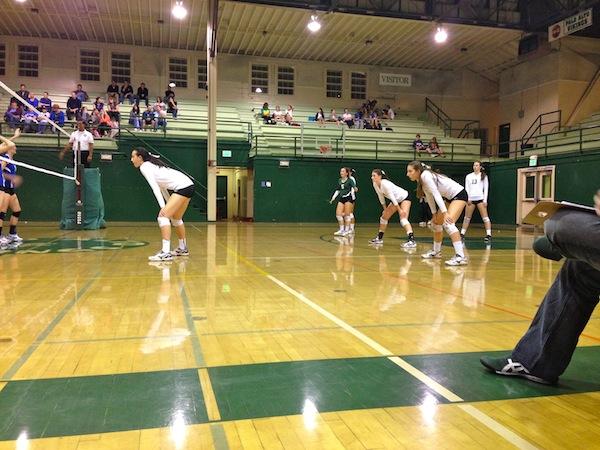 The Palo Alto Vikings’ volleyball team fell to the Los Altos Eagles during three sets on Thursday, October 31st. The game was the last home volleyball of the season, as well as the last Paly volleyball game played in the historic Paly gym.

The Eagles dominated the first set of the game, beating the Vikings 25-18. Becca Raffel (‘14) and Lauren Kerr (‘14) both contributed numerous times during the first set, but the Eagles were able to take the lead after several rallies proved successful.

The Vikings came back strong after the first set, taking the lead during the first part of the second set. Kerr made a crucial kill following a long rally from both teams. The Eagles managed to tie up the set after an unsuccessful attempt made by Keri Gee (’14) ended an impressive rally. Following several kills by both teams, the Eagles took the lead after a strong rally and several addition kills. The Vikings came back during the end of the second set during a impressive rally, but following numerous kills from both teams the Eagles held their lead over the Vikings, winning the second set 25-21.

Coach Dave Winn expresses his sentiments of the final home game of the season.

“I don’t understand what happened, I don’t know why we were completely out of sorts but it is a disappointing way to end the tradition of this gym with a tough loss,” Winn said. “Luckily it wasn’t our last game and we still have more games to play.”

Co-captain Gee agrees that the game was a disappointing loss, but believes her team played well during the end of the game.

“It was a good fight for most of the match. We fought and we really wanted it, but they were playing amazing tonight, a lot better than I expected,” Gee said. It’s sad that we couldn’t push to the end. At the end I thought we did really well, so I’m glad we came together as a team at the end and lost as a team.”

Gee also expresses the need for her team to rekindle their team bond as they go into CCS for the end of their season.

“Going into CCS we can definitely work on our whole team bond. I feel like we kind of let go of that team chemistry we had during the match but I know that it’s there,” Gee said.

The Vikings will play next on Saturday, November 2nd at Independence High School during the Spikefest 2 Tournament.