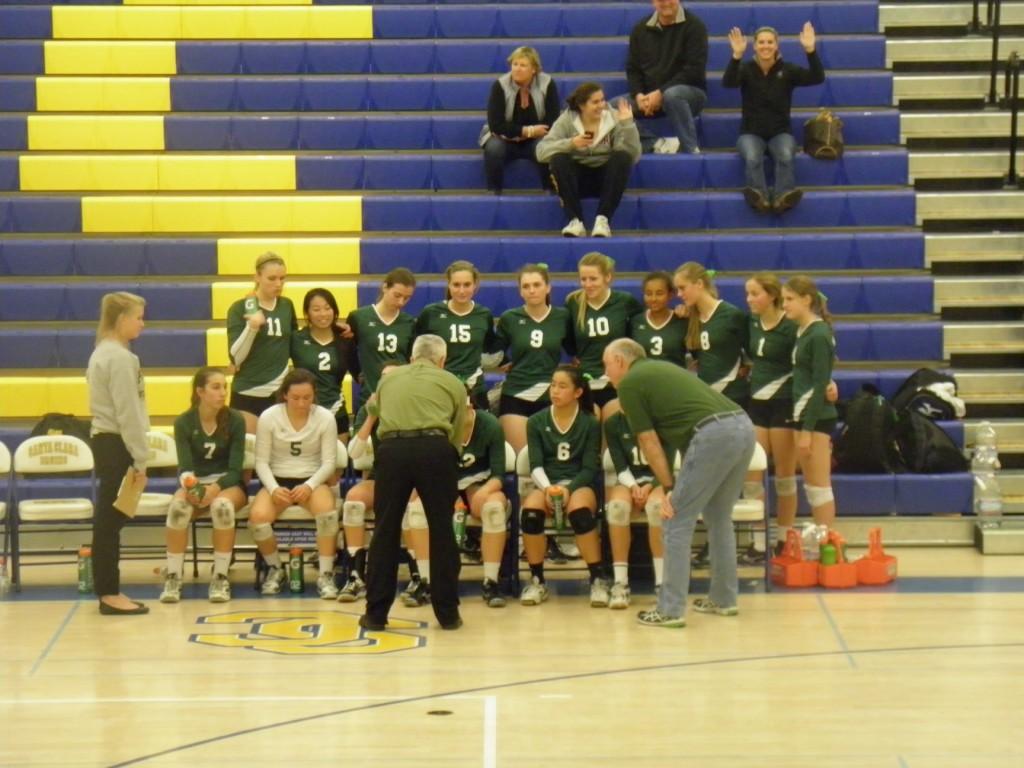 The Vikings gather during a time out called by Menlo Atherton in the third set.

The Paly Vikings took on the Menlo Atherton in front of an energetic crowd at the the Central Coast Section (CCS) semi-championships tonight, defeating the Bears in five close sets. The team will advance and play at the CCS championship this Saturday.

“We studied all year for [this],” coach Dave Winn said. “We knew all the answers and we had to really work hard to write them all down.”

Paly and Menlo Atherton started off the first game battling neck-and-neck, tied at 8-8. However, it was the Lady Vikes that began to rally and gain a lead against Menlo Atherton. Before closing out the game, Paly struggled against the momentous Bear offense and committed multiple errors, causing them to lose the first game 25-19.

“We made so many mistakes in the first game,” captain Keri Gee (’14) said. “We played our hearts out and we were motivated to do better things for the next set.”

Paly fell behind soon after in the second game, 4-0, due to errors on serve receive. However, the Lady Vikes soon gained momentum with back-to-back aces by Becca Raffel (’14) and kills by Jade Schoenberger (’15), tying the game at 8-8.  As they found themselves trailing behind the Bears for the first half of the game, the Vikes were rejuvenated by six consecutive Schoenberger kills in a row late in the set, capturing the 25-22 win.

“We had to have a new mindset going into the second game,” Gee said. We knew they were a good team.”

In the third set, Paly and Menlo Atherton constantly fought for the lead throughout the set. Multiple kills by Lauren Kerr (’14) and Schoenberger helped Paly earn a lengthy lead. Paly’s strong offense and highlighted by powerful serves helped the Lady Vikes claim their second win at 25-20.

Paly and Menlo Atherton again fought for control in the fourth set. In the beginning of the set, Paly maintained a close lead through kills by Schoenberger and an ace by Molly Fogarty (’15). Unfortunately, Paly was unable to maintain their lead and found themselves falling behind towards the end of the game. Menlo Atherton defeated the Vikes in the fourth set 25-20.

“To [Menlo Atherton’s] credit, they made us work,” Winn said. “They made us work hard for every single point . Nothing came easy and it makes it more satisfying when a team does that.”

In the fifth set, Paly maintained their lead throughout the game. Fogarty had a key ace and Schoenberger had more kills, contributing the momentum of the Viking’s side of the court, finally resulting in a 15-9 Viking win.

Similar to the rest of her teammates, Kerr was proud of the way her team performed.

“We all came together and everyone brought forth something to have us win that game,” Kerr said. “I’m so proud of everyone on my team.”

The Vikes will continue on to play in the CCS Finals at Independence High School this Saturday in San Jose. The time has yet to be determined.