Football defeats Leland 54-24 in first round of CCS 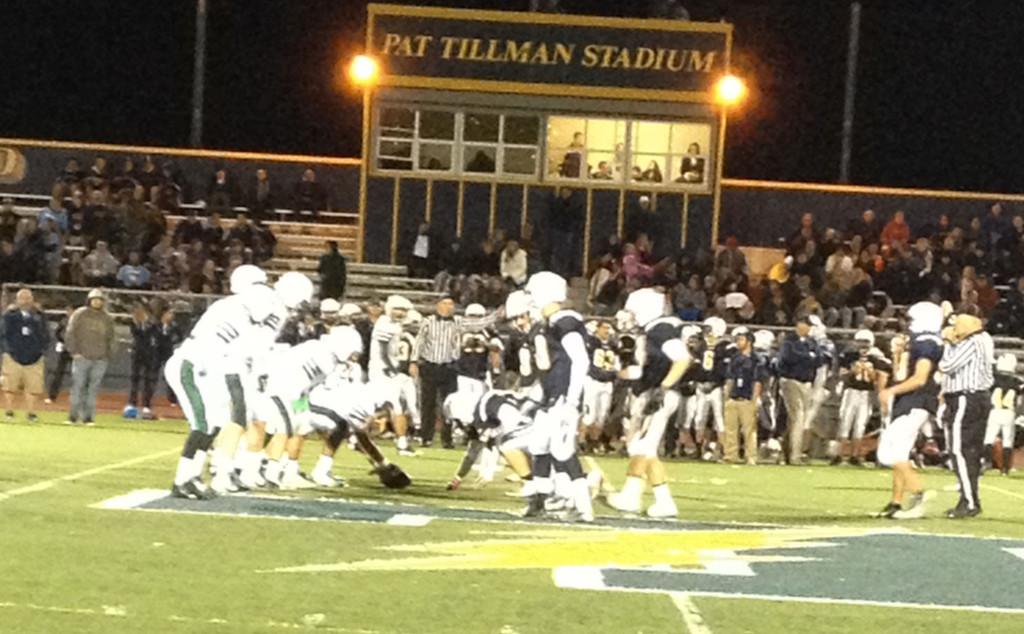 Looking to rebound from the regular season with a record 0f four out of nine wins, the Palo Alto Vikings’ football team solidly defeated the Leland Chargers 54-24 in the first round of the CCS playoffs Saturday night.

Keesean Johnson (’14) and Malcolm Davis (’14) scored four touchdowns a piece, and Keller Chryst (’14) passed for four as well. Although a 35 point second quarter outburst put the game out of the Chargers’ reach, it started out very close.

Leland struck first blood with a 19-yard touchdown pass slightly under four minutes into the game. The Vikings countered with a strong kickoff return and a score of their own two plays later on a 20-yard pass from Chryst to Johnson. However, a Charger field goal put Paly down 9-7 at the end of the first quarter.

A few minutes into the second quarter, the Vikings regained the lead on Davis’ first touchdown,  six-yard run. However, the Chargers returned the ensuing kickoff for a touchdown and completed the two-point conversion, putting them ahead 17-14. Down once again, the Vikings turned to their big playmakers and proceeded to score six straight touchdowns.

Two plays into their next drive, Chryst and Johnson connected for their second touchdown, this time a 60-yard pass. After a Leland punt, Paly drove down the field again and Davis ran in a 41-yard score. Less than a minute later, Johnson returned a punt for a touchdown. Finally, a Justin Hull (’16) interception set up Davis’ second touchdown run, putting the Vikings ahead 42-17 with 42 second left in the half. The Chargers almost regained momentum before halftime, but a 35-yard touchdown was erased by a false start penalty.

The Vikings started the third quarter right where they had left off. A methodical drive consisting of a mix of run and pass plays burned over six minutes off the game clock and resulted in Chryst and Davis connecting for a touchdown. During Leland’s next possession, Hull intercepted another pass. The Vikings drove down the field once more and Johnson caught another from Chryst. The 54-17 lead would be narrowed by a fourth quarter Charger touchdown, but the deficit was too big to overcome as the Vikings triumphed 54-24. In addition to the big plays on offense, members of the team shined on defense as well.

Coach Earl Hanson echoed Anderson’s praise, mentioning how Frick played well on both sides of the ball. In addition to Frick, Tully McCalister played well despite a previous injury. Although he could not play on offense, McCalister played most of the game defensively with a cast on one arm. Overall, the team seemed happy with the win.

With the win, the Vikings will play against Saint Francis next week in the CCS semifinals. Already, the players are figuring out how to get ready.

“We’re going to learn what they do and go out to practice and work hard,” Johnson said. “A lot of people on our team, a lot of seniors, have nothing to hold back and we know a lot of people on that team so we’ll have to come out and play like we played tonight.

Football defeats Leland 54-24 in first round of CCS