Breaking away from boys’ golf to form its own entity this season, girls’ golf placed second in SCVAL and first in CCS in its first separated season. 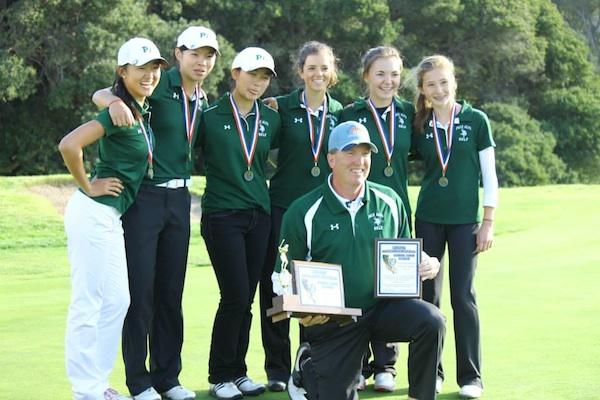 Rarely does a team see great success in its year of creation. Triumphant wins usually come after building a foundation over time, allowing the athletes to hone their abilities. However, in rare instances, a team may immediately have high achievements. This year at Paly, girls’ golf was that team.

Winning Central Coast Section (CCS) is no easy accomplishment: even more impressive is a team winning CCS the same year that it is introduced to a school. Last fall, girls’ golf was separated as its own team for the first time in Paly history. Although female golfers were previously part of the co-ed golf team with the boys, this year they disbanded and formed their own girls’ team.

“I didn’t really know what to expect going in, but I had a lot of fun with everyone,” Olivia Johnson (‘15) said.

The immediate victory of the team came from a group of relatively new golfers; seven of the nine players were newcomers. Although many of the girls began the year new to the sport, they defeated Los Fais 221-192 in their first tournament. Their record remained strong as the team continued to compete fiercely against its opponents. Although girls’ golf tied Gunn for first place in leagues with a record of 11-1, its only loss in a match against the Titans, there was no other team on par with the Vikings in CCS.

“We won CCS, and then we got fourth place in states [California Interscholastic Federation],” Johnson said. “None of us were really expecting to go very far, and we didn’t think that we would even place very high in leagues. Winning CCS was a huge shock to us.”

Four of team’s crucial players were Michelle Xie (‘15), Emily Wong (‘17), Annie Chen (‘14) and Audrey Horn (‘14). Although the team has its stars, all of the players contributed to its success as a whole during the girls’ first season together.

“Michelle and Annie were like our one-two punch, Emily Hwang and Audrey Horn came in with more punches and then Celia Willner [‘17] and Elise Kiya [‘17] came in with the knockout punches,” Coach Doyle Knight said. “Olivia Johnson, Sophie Robinson [‘15] and Alice An [‘17] gave us depth.”

Girls’ golf ended the season with a low score of 429 in CIF. A considerable amount of the team’s glory in the tournament belongs to Xie. After placing first in NorCal with a score of 73, she then proceeded to CIF where she tied for eighth place with 74 points.

“Michelle is the best player on our team,” Horn said. “She got a hole-in-one during one of the matches, so that was super exciting.”

Although the team made it exceptionally far for their first season at Paly, the players felt that they could have performed better at CIF and placed even higher.

“As a team, we played really well except for NorCals and states,” golfer Audrey Horn (‘14) said. “It was surprising that we made it to states in our first year.”

Although the girls’ scores did not always reflect their supreme execution, the team still felt that it played well in its first season.

“They buckled down when they had to,” Knight said. “Annie Chen was key; Michelle Xie had to miss a few matches, and Annie kept the team together. She scored low when it was needed. When the girls were all there, they all fulfilled their role.”

The team became very close during the time that they spent together both on and off the golf course. The girls had many bonding moments over the fall that allowed them to support one another in the season, from extended car rides together to a long match where players were exposed to dehydration and one even had a broken ankle.

“The whole experience was great,” Knight said. “But I think my favorite was the van rides to and from our matches. The girls had so much energy. They would be singing and laughing and talking… They would sing at the top of their lungs. All the girls got along so well.”

Horn agreed that they had strong team dynamics.

Despite the laborious efforts made by the team, the lady Vikes still managed to make their time together exciting.

“Just getting to know everyone and hanging out was really great,” Sophia Robinson (‘15) said. “Going on golf excursions on the weekends with the team was also insanely fun.”

As the team will continue to gain new golfers and grow as a whole in seasons to come, it hopes to progress as it establishes its place among the other teams at Paly. With a group that has already made their potential clear, girls’ golf will hopefully continue to expand its greatness in the upcoming season.

“I am so proud of these girls not only for winning a CCS title their first year, but for being such wonderful people and developing good relationships with each other,” Knight said. <<<