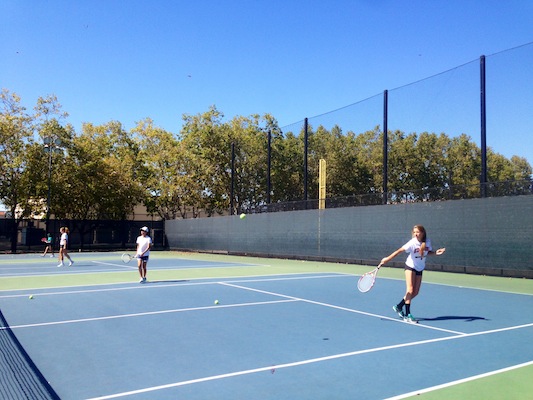 Halle Biorn ('16) anticipates hitting the ball at a recent practice. Biorn is one of the players who is looking to fill the gap of the eight graduated seniors.

After losing a close CCS semifinal match to the Monta Vista Matadors, the Palo Alto girls’ tennis team ended their 2013 season 19-4 in league games. This year the team decided to drop down from the De Anza league to the El Camino League after losing several of its crucial players.

“Because we graduated 8 starters we did not have a big junior varsity last year so I decided to take the team down to the El Camino League, so we would have a more positive season”, Coach Andy Harader said.

The younger team is hoping to win their league this year and to have some of their top players win the individual championships in the upcoming season.

“I’m feeling very positive about it, we are down a league but I think that we are going to do very well in this league,” Harader said. “We should win it.”

Despite losing key players the team feels confident about their upcoming season due to the talent of its younger players.

“I’m feeling really confident, we have a lot of new talent and overall we are a really strong team,” Biorn said. “I think we are going to do really well this season.”

The Lady Vikes’ first match is September 3rd at Paly.