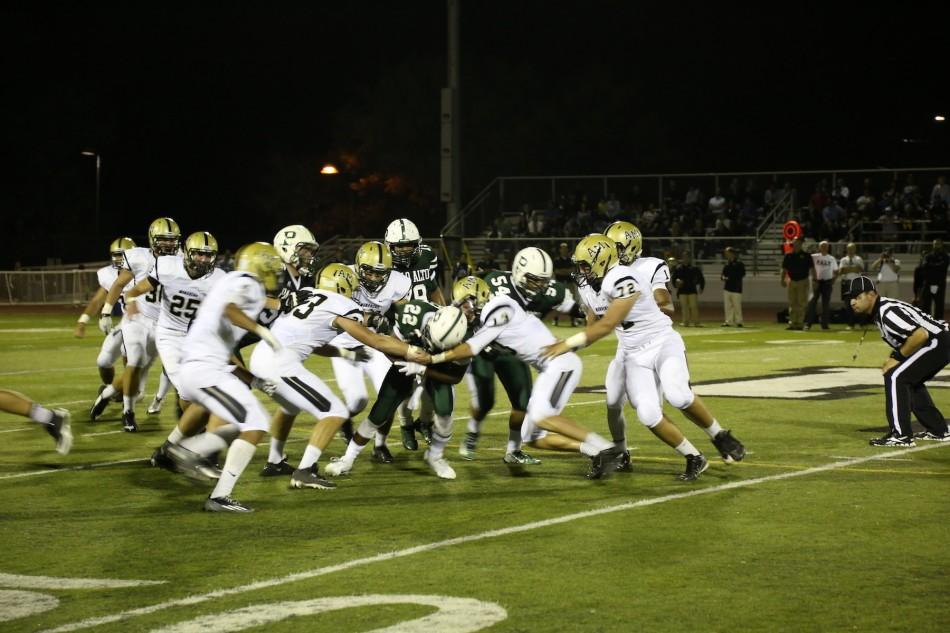 Despite a strong effort, the Palo Alto High School Vikings were soundly defeated by the Archbishop Mitty Monarchs to the tune of 55-14 Friday night under the lights at Paly.

Paly’s two scores came on touchdown runs of 11 and 22 yards by Jayshawn Puckett (’15), one of the team’s few starting seniors. Head coach Jake Halas had positive words to say about the running back.

“[Puckett] had some great cuts,” Halas said. “When he puts his foot in the grass, he can really go. He has good vision. He’s a tough kid. I’m really happy with Puckett. He’s a senior leader, one of the few we have right now.”

The second quarter started off well as Puckett ran in his first touchdown, but Archbishop Mitty responded a minute later with a touchdown of its own. After trading scores again, Mitty was looking to add another before the end of the half, but Isaiah Harrison (’15) intercepted a pass in the end zone and the Vikings escaped the half trailing 34-14

Coming out of the locker room after halftime, Paly looked strong and drove down the field, highlighted by a 41 yard pass from Oliver Svirsky (’16) to Eli Givens (’16). Shaun Pike, however, fumbled the ball out of the back of the end zone, resulting in a touchback and a turnover. From there, Archbishop Mitty took over once again scoring twice in the third quarter and once in the fourth. Near the end, Svirsky was replaced by Justin Hull (’16). The last play of the game, a pass from Hull, was fittingly dropped.

“They were bigger than us and more physical than us,” Hull said. “Overall [though], we didn’t give up and I’m proud of our team.”

With the defeat, the Vikings fall to one win and two losses on the year. Their following game will be against Palma at home next Friday. For the second straight week, the Vikings were outscored by more than 30 points. Halas, however, seems unfazed by the losses.

“You know, we’re down a little bit right now,” Halas said. “But we don’t quit, and this school don’t quit. This school has been around 100 years. We expect excellence, and we’ll be back, you can guarantee it.”