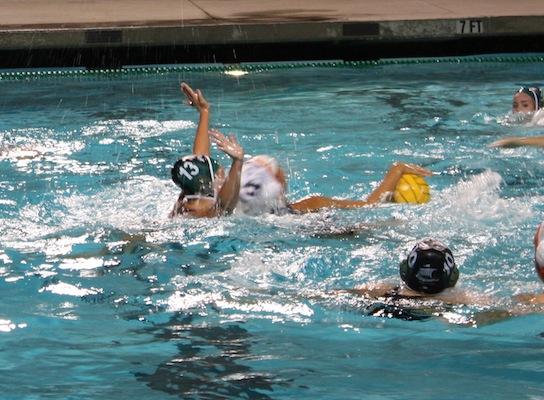 Girls’ water polo triumphed over Woodside in the first round of CCS, finishing the game 12-7.

“There was a lot of energy in the game, and we were able to make plays which led to goals,” Katie Francis (‘16) said. “We kept pushing throughout the entire game.”

Although the Wildcats had several shots on goal within the first minutes of the game, goalie Joanna Falla (‘17) managed to defend the Vikings’ goal. Paly was soon able to regain possession as Francis scored the first goal of the game. A pass from Gigi Rojahn (‘16) to Tess Van Hulsen (‘15), who sunk the ball in Woodside’s goal, brought the score up to 2-0. In a long-distance shot by Rojahn, followed by another long shot by Alina Drebin (‘16), the Vikings maintained their lead as the first quarter finished 4-0.

After several missed shots by both Paly and Woodside, Francis scored once more. However, the Wildcats soon retaliated as a lack of defense brought the score up to 5-2 with Paly still ahead. With less than two minutes left on the clock for the second quarter, a Woodside player made a breakaway and finished. A goal by Sabrina Hall (‘18), followed by another Woodside goal, brought the score up to 6-4 at the end of the second quarter.

Despite several attempts at goal from the Vikings, a distance shot by a Wildcat made the score 6-5 early in the third quarter. An arching ball sent into Woodside’s net by Van Hulsen, shortly backed with a second shot by Rojahn, put Paly back in control of the game. After passing to Francis and getting the ball back, Olivia Scola (‘15) scored for the Vikings to make the score 9-5. Continuing to put pressure on the Wildcats’ goalie, Francis and Drebin both scored again to make the score 11-5.

The Vikings felt that they performed well in the game, working hard to complete shots; finishing has been an issue for the team.

“That was some of the best shooting we’ve had this season,” Drebin said.

In the final quarter of the game, Paly began to lose its powerful defense. Despite a third goal by Van Hulsen, Woodside managed to gain back some of its lost strength by scoring twice. The game finished with a 12-7 win for the Vikings.

Despite the team’s strong win, there is still work to be made before the next game.

“We need to work on preserving the ball, because we were giving up a lot of steals in the end,” Francis said.