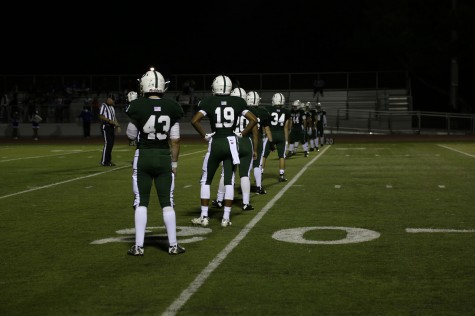 Viking’s kick-off team lines up in its home opener against Sequoia.

The Palo Alto Vikings defeat the Sequoia Cherokees 54-28 at home in their season opener on Friday night.

The Viking started the game strong with Eli Givens’ (‘16) 50-yard run for a touchdown after a completed pass by Hull. The Cherokees responded that quarter with a completed pass for a 64-yard touchdown, but had a false start on the PAT, catching up to the Vikings 7-6. Paul Jackson III (‘18) gained 22 yards to help the Vikings get to the 36 yard line, ending the first quarter.

A few minutes into the second quarter, Hull completes a touchdown pass to Riley Schoeben (‘16), increasing their lead 14-6. The Cherokees answered back with a 2-yard run into the endzone, gaining the extra point, cutting the Viking’s lead to only one at 14-13.

“We just knew, we just worked too hard, we conditioned too much, and lifted. So, we felt comfortable in there at halftime even though we only had a one point lead,” Coach Halas said. “We felt that we could keep moving on.”

To start the second half, Sequoia was able to intercept Hull’s pass, later scoring another touchdown, Cherokees pulling ahead 20-14 with 8:47 left in the third quarter. Three minutes later, Jackson had a 63-yard run for the touchdown, regaining the lead. Then, Paly’s Ty Wilcox (‘17) had an interception that led to Tony Caballero-Santana’s (‘16) run up the middle to the endzone for a touchdown and a Viking lead 28-21. Moments later, Josh Brigel (‘17) grabbed his own interception that created a scoring opportunity for Schoeben, who had his second touchdown of the night, securing a 15 point lead for the Vikings.

Late in the third quarter, Paly’s lead was cut to 35-28, after Sequoia’s Faave Brown scored his second touchdown of the night. However, in the fourth, both Hull and Shaun Pike (‘16) were able to rush in for two touchdowns, increasing the lead to 54-28.

“The turning point is that we all lifted each other’s spirits,” Caballero-Santana said. “We worked hard together and we had to do it as a team and as a family and that’s what happened.”