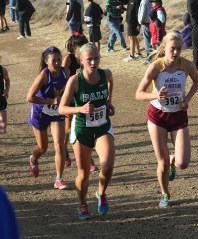 After the loss of key runners either from injury or graduation, Girls Cross Country hopes to rebound with strong running from their underclassmen this year.

“We have a group of fourteen seniors who are going to need to step up.  We also have a very good crop of sophomores, who ran very well in CCS last year, and I hope that they can make up for the injury of our best runner [Bryn Carlson]  who is out for the majority of the season”, Coach Paul Jones said.

Runners Maddie Feldmeier (‘17) and captain Bryn Carlson (‘16) each sustained injuries in the offseason, leaving Carlson out for part of the season and Feldmeier out for the year.  With Katie Foug (‘15) off to college, the Girls Varsity team will be without their number two and three runners from last year.

However, with an influx of players from the past years Carlson is still optimistic

“We have a group of sophomores who have developed into quite strong runners since last year, which is key because our team has lacked depth in previous years”, Carlson said.

The team has been preparing all summer during optional workouts in June and July, and practices in August.

“A number of our better runners have been preparing over the summer.  They’ve probably worked themselves up to 40-45 miles a week,” Coach Jones said.

The team’s goal is to win league, and to eventually qualify for state, through placing in the top two in CCS.

“I am confident that the team still has a chance of reaching its goal [of reaching state] , especially considering that Gunn has dropped to Division II while we are still in Division I”, Carlson said.