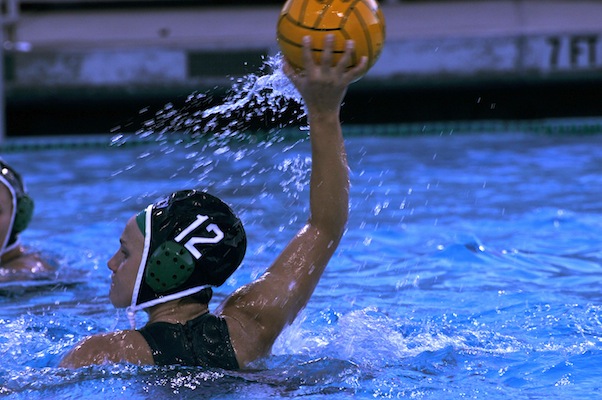 Shannon Scheel ('12) winds up for a shot in the girls' water polo game against Castilleja. Scheel scored two goals for the Vikings.

The Vikings had plenty of shots on goal throughout the entirety of the game but could not capitalize.  That along with an early Gunn lead, where they scored four of their five goals in the first half, made it difficult for the team to come back.  Even with the tough loss though, head coach Aileen Delaney overall was pleased with the performance of her team and believes it has been one of their better games on the season.

“I think it was probably so far of the young season, our strongest game against a very good team,” Delaney said.  “We improved on the turnovers which was our weakness earlier in the year.  Our defense was pretty strong, and we were able to get a number of good shots off.  So overall we feel good about what we were able to accomplish against a good team.”

Goalie Joanna Falla (17’) who made a bunch of great saves including one on a five meter in the fourth quarter, said the group’s passing and sharing of shots is something they are looking on improving as the season continues.

“We still every so often have a bad pass,” Falla said.  “So to really get a hundred percent efficiency on that would be super awesome.  We usually have one main shooter but I think it would be really awesome to see everybody have a lot of shots on their records.”

Talia Stanley (18’) who scored Paly’s second goal in the third quarter and who had key steals late in the game stated that she is looking forward to a rematch against Gunn.

“I’m really looking forward to playing Gunn again,” Stanley said.  I think that we were really in this game and I think we have a really good chance of beating them next time.

The ladies are looking to come out strong in their next matchup against league opponent, Los Altos, on Thursday, September 15.