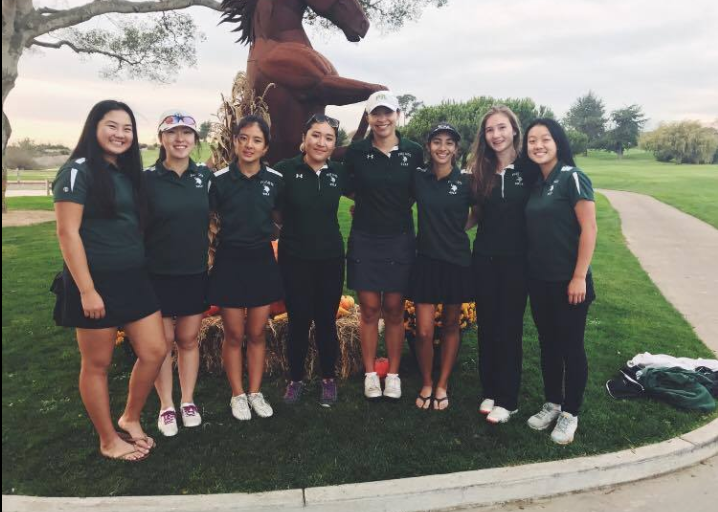 Following a terrific 2016-2017 campaign, the Palo Alto High School girls golf team is looking to return to CCS with the help of veteran players and a skillful group of underclassmen.

“We have two really good freshman,” Knight said. “I think the level will be the same, it’s just whether or not the freshman can handle the pressure of playing on a team, opposed to playing by themselves.”

“Despite being young, they are incredible golfers and I look forward to seeing them contribute to our team this year,” Yu said.

After playing all four years on the golf team, Yu has experienced competing with a variety of teams, but believes this one has what it takes to go far.

“I am really excited for this upcoming season. Although my expectations for my team are quite high, I don’t think they are unreasonable,” Yu said. “Our team definitely has enough depth – the starting lineup is now pretty much filled with players who would be among the best in the league.”

Yu believes that their real competition this year will be private schools such as Saint Francis, which has one of the stronger programs in the Bay Area.

As well as Yu, Lauren Wagner (‘18) is also optimistic about this year’s’ season.

“The team is looking really strong this year,” Wagner said. “We’ve gained a lot of new faces, mostly freshman, but a lot of them are shooting very well and some of them will most likely be in our starting six,”

Wagner also notes junior Jasmine Choi (‘19) as the “captain in training.” Choi has been playing at Paly for 3 years and is looking to be a top player this year.

For freshman such as Pineda and Mata, the high school game is harder to adapt to because of its short length. School matches are nine holes, opposed to the conventional eighteen. This means that new players have to get in their groove quickly because there are not enough holes to make up for mistakes.

For returning players like Yu, playing at Paly has elevated her game dramatically because of the short rounds.

“Matches don’t often allow me to warm-up for the amount of time I would prefer to, which has trained me to adapt quickly and play well without having to practice as much,” Yu said.

The different high school game will test this young team’s skills on the course. And as for the rest of the season, the Girls are looking to have one of their best seasons yet with an incredibly talented team.