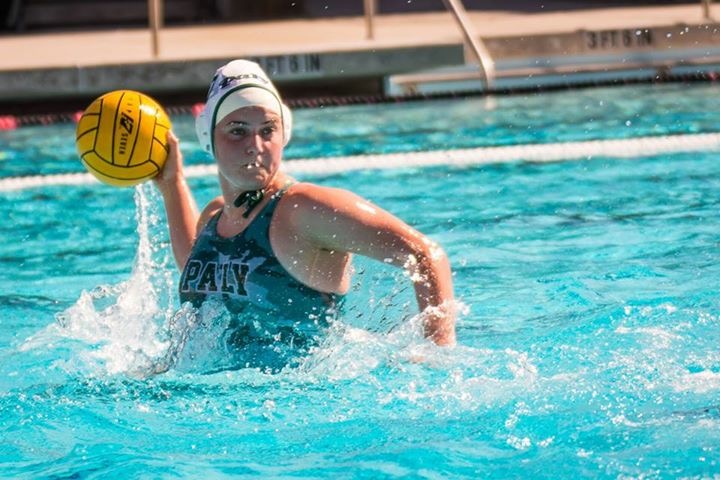 Paly Girls’ Water Polo played Saratoga tonight and won by a score of 13-4. The game seemed pretty evenly matched during the first quarter, ending with a score of 3-2, with Paly up.

Near the middle of the second quarter, the Vikings picked up steam and started dominating. This was sparked by Sophie Frick’s (‘18) back-to-back goals followed by an assist to Hollie Chiao (‘18) at the beginning of the third quarter.

The Vikings continued their dominance throughout the third quarter with goals from Chesnie Cheung (‘20), Grace Rowell (‘19), Sophie Andersen (‘20), and two in a row from Sabrina Hall (‘18).

Hall also started off the fourth with a goal from deep. This was the last of Paly goals in the game.

In the last two minutes, Saratoga tried to answer Paly’s scoring run by scoring two more goals, but that was not nearly enough to match the Viking’s 13 goals.

The Viking’s defense was also a major factor in their success as Saratoga struggled to get a shot off before the shot clock sounded in multiple possessions.

Goalie Esme Stotland (‘19) believes the whole team stepped up in contributing to this victory and agrees that defense played a major role.

“I thought we played awesome defense and I thought everyone was working really hard,” Stotland said.

Like Stotland, Cheung also stated that the team tried to focus on defense and running different plays.

“Next practice we will work on more plays, more conditioning, and a lot of shooting,” Cheung said.

The lady Vikes face off against Homestead on Thursday at 3:30 in Homestead’s pool.