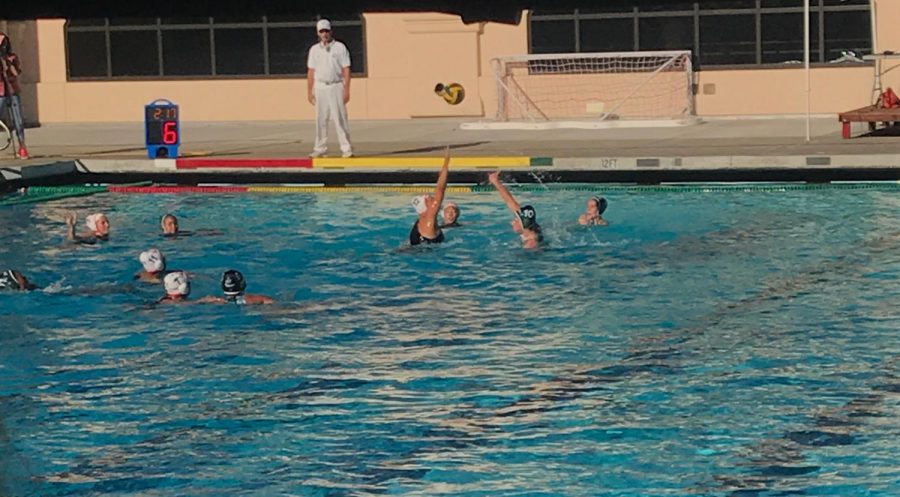 The girls’ varsity water polo team fell to Gunn Thursday night by a score of 8-6. Although they did not end up victorious, the Vikes put up a great fight and the score reflected a huge improvement from their first meeting with the Titans this season.

The score remained extremely close throughout the game and both teams fought hard until the final buzzer.

The first quarter reflected this as it ended with a score of 3-2 in favor of Gunn.

Paly quickly responded with a goal by Jules Steil (‘21) off a fast break pass. Paly seemed to be oe a roll, having two more great shots to end the half. These two shots were both saved by the Gunn goalie, who had a really good game.

Gunn started off the third quarter, by adding another goal to their score. Paly then had two goals in a row, by Sophie Frick (‘18) and Hall, to tie the score at five with three minutes left in the third quarter. Gunn then had a series of three goals, lengthening their lead to three.

Paly started making a comeback with 30 seconds left with another goal by Steil, but unfortunately that was not enough and the game ended with a score of 8-6, with Gunn coming out victorious.

Although Paly ended up losing, it looked like a much more even match than their first game with Gunn that ended with a score of 10-2.

Despite the loss, goalie Esme Stotland (‘19) was happy about her teammates performance.

“I’m really proud of everyone, we had one of our freshmen score two goals,” Stotland said. “It was awesome considering they beat us by eight last time, I’m feeling a lot better about this game.”

Stotland also believes that if they continue to work on the little things at practice, it will benefit them a lot.

The Vikes face Saratoga away on October 10th at 6:45pm.