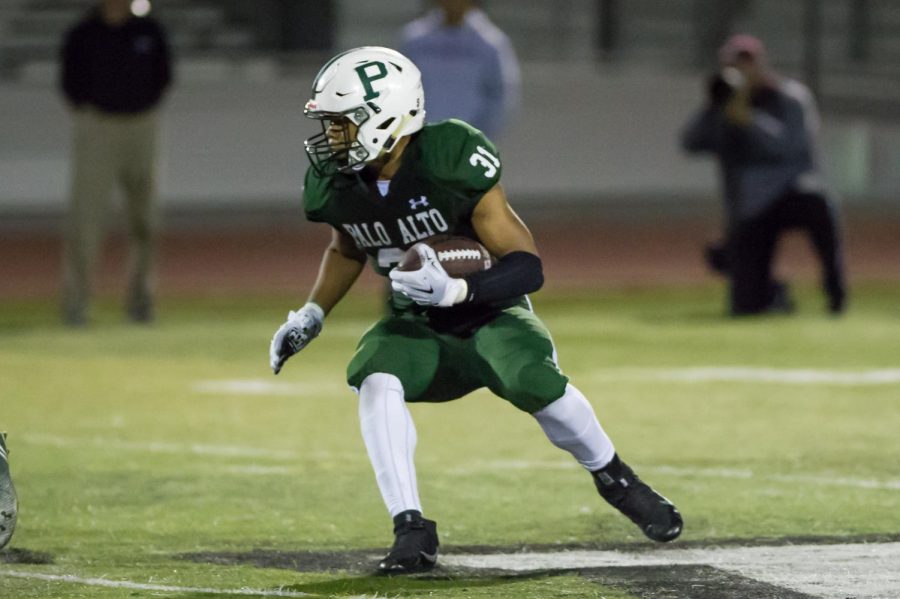 Behind a dominant rushing performance by the Vikings’ offense, Football beat Los Altos 44-6 to claim a spot in the CCS tournament.

From the start of the game, Paly’s offensive weapons took control of the game. Jnacio Henley (‘20) had multiple impressive kick returns, including the opening kickoff, and gave the Vikings an early spark.

Paly broke the Eagles’ defense early on a 56 yard touchdown run by Paul Jackson III (‘18) with 9:27 remaining in the first quarter. The Vikings then force a three and out by the Los Altos offense and got the ball back to the offense quickly. Henley used that opportunity with a nice punt return and then on first down took a fly sweep 60 yards to the house. Paly had a 14-0 lead at the end of the first quarter.

The Vikings’ momentum carried into the second quarter and throughout the game. With 7:36 remaining in the half, Seattle Hmelar (‘19) blocked a punt out of the back of the endzone to force a safety. Then a 16-yard touchdown run by Aiden Chang (‘19) extended the lead to the halftime score of 23-0.

In the second half, Paly’s rushing offense extended the lead and milked the clock while the defense continued to puzzle the Eagles offense. Paly had three interceptions returned for touchdowns, however two of them were called back due to illegal blocks on the return.

A last-minute touchdown got the Eagles on the board, but the Vikings held on to win 44-6.

“Our defense did a great job stopping Los Altos’ run game,” Joe Reynolds (‘18) said. “Our pass blocking was the best it’s been all season. The special teams unit gave our offense great field position and our run game had some key plays that scored a lot of points for our team.”

“Last night we all played with a lot of heart and capitalized on the other team’s mistakes,” Jackson said. “We will continue to get better and play of the momentum we have built. It all starts in practice.”

The Vikings will look to keep their momentum going at Wilcox on Friday next week at 7pm.