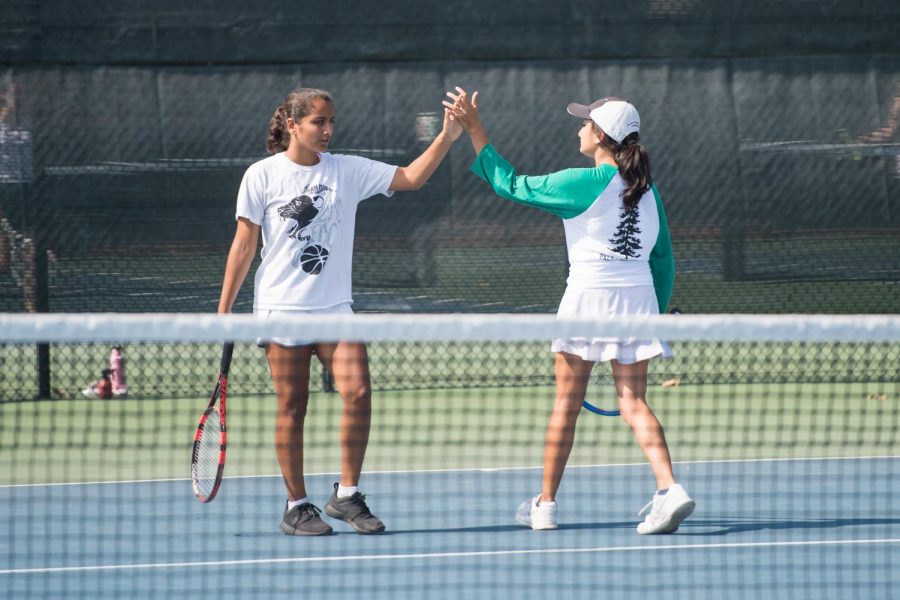 After a hard season in their first year in the De Anza League, the Paly girls tennis team hopes to find more success with their returning underclassman and new talent. The team is excited to utilize their incredible skill together as what Coach Harader is calling “the best tennis team Paly has ever seen”.
The team lost three seniors, but has five returning sophomores, including nationally ranked Maddi Page (‘21). With this relatively unchanged roster, the returning players are confident that they will continue to grow as a team and yield better results than last years season.
“This season probably has the best tennis players Paly has ever had, all at once” says Maddi Page (‘21).
This sophomore class is looking to lead their team to the top of the challenging De Anza League, the top league in Northern California. Finishing last year with a record of eight wins and nine losses in one of the most competitive leagues in the area, they will continue to push the boundaries of their tennis abilities. In addition to their very strong sophomore class, they expect big things from the incoming freshman.
“We have two new freshman this year […] who are both playing singles and are very talented players” says Rachel Owens (‘21).
These incoming freshman, Camila Wong (‘22) (captain) and Iris Li (‘22), hope to fill the gap left behind by the strong senior class.
“I’m really excited to be playing on the team this year and since I’m a freshman it will be a fun challenge to practice and compete with older high schoolers” says Li.
The team does not plan to make any big changes to their strategy this season but is ready to take on the rest of their league in a vie for the league title. They will face closest competition from Saratoga, Monta Vista, and Los Gatos, with the latter winning CCS and the Norcal Championship last season.
“For girls tennis, our league is probably the hardest in the country” says Paige (‘21).
That being said, the Paly team is looking the best it ever has and Coach Andy Harader is excited for the season to come.
“The team is looking excellent, it is going to be a big improvement, practically the whole team of 12 has UTR’s [Universal Tennis Rankings]” says Coach Harader, “It [the team] is going to be the strongest by far […] so I am very hopeful about that”
Paly will kick off their season on August 29th against Castilleja in what will mark the start to a season of redemption.