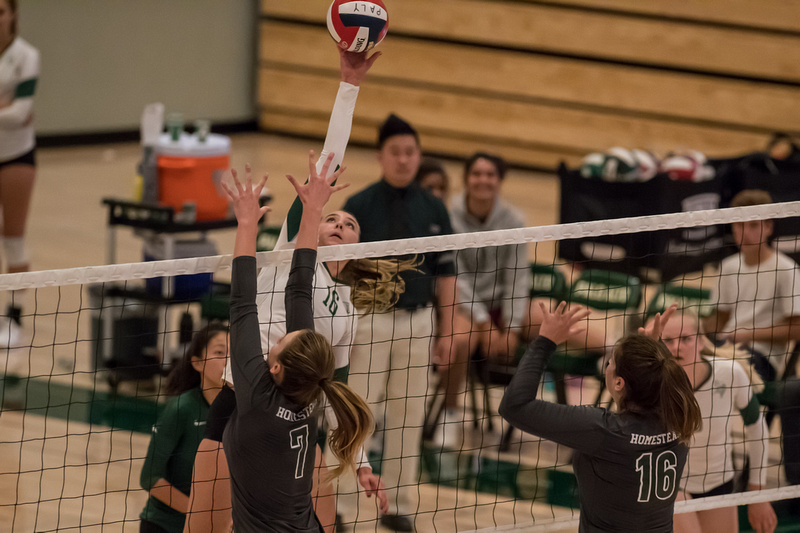 The Palo Alto girls volleyball team kicked off their league play tonight with a solid win over Homestead high school, 3 – 0.

“This was our most important game so far because we knew it was going to affect CCS” Amelia Gibbs (‘20) said.

The Vikes dominated from the start, immediately pulling ahead in the first set. The team kept a safe lead throughout the set, up by nine at one point. A round of huge blocks from Grace Thayer (‘20) and Siena Brewster put the Vikes at game pont. Palo Alto clinched the first set 25 – 18.

“Every game we get better, communicate with each other better and the more time we spend playing together the better we’re going to get” Gibbs (‘20) said.

The second set began with a more competitive start, and a tip from Gibbs (‘20) ended a lengthy rally in Paly’s favor. The Vikes struggled to find their footing early in the set, trailing 8 – 5 early on. A couple missed serves on Homesteads part tied it up 13 – 13. Strong serves from Gibbs (‘20) put the Vikes in the lead for the first time this set, and they became up 15 – 13. Sophia Krugler contributed major kills and serves, assisting the Vikings to a 25 – 22 win in the second set.

Paly initially trailed in the final set, down 5 – 3 in the beginning. Slowly but surely the Vikes fought their way back on top after tying 18 – 18. A combination of kills from Krugler (‘20) and tips from Mallory Kuppe (‘19) put Paly in striking distance of a win. The Vikings sealed the deal, winning the set 25 – 22 and consequently clinching the game.

“I definitely think this was a good start to league and hopefully we will be as successful in the future” Krugler (‘20) added.

This win will no doubt set the tone for another great season of Paly girls volleyball. Catch the Vikes next game on Tuesday September 11, they will be playing away against Monta Vista.