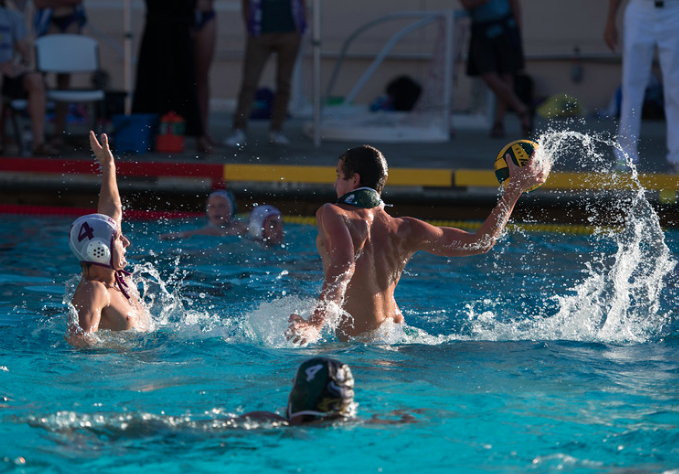 With stellar defense and a sharp offensive, the boys water polo team swam to victory over Piedmont on Friday 15-9.

The Viking-Highlanders meet-up was unprecedented as the two had never competed against each other in the pool. What they have in common, however, is their elite positions within their respective leagues. Piedmont is second in the West Alameda league, while Paly is tied for second in the competitive DeAnza league that coach Ethan Look says is a changing landscape.

“This league is changing very quickly,” said Look. “It’s starting to come together–who the tough competition is going to be. Los Altos, Los Gatos, us, and Homestead are looking like the ones to beat.”

After beating Homestead in last week’s match-up, Look noticed similarities in Piedmont’s style of play, which revolved around two central players responsible for much of the Highlanders’ offense. Despite concentrated talent on their team, however, the Vikings demonstrated their determination and inspiring work ethic that eventually brought them to victory.

“Our defense was really good in the second half,” said Charles Mitz (‘21) of his team. “We came in with more intensity.”

This was crucial for the team, as early in the third quarter senior starter Javid Alasti was permanently ejected after a confusing call against him for “brutality”. Although the call was admitted post-game by the referee team as perhaps a misunderstanding, the decision sent Alasti out shortly after halftime, leaving the team to regroup and finish out the game without him.

“We couldn’t do anything about [the call],” said Mitz. “We had to keep playing harder, since we were one starter short, and some people had to step up.”

The Vikings certainly stepped up with blocking from goalie Ben Rappaport (‘19) and excellent defense from Dexter Gormley (‘20), working hard to slow Piedmont’s offense who scored just 3 goals in the second half.

Last night’s win demonstrated the Vikings’ depth and their ability to focus and finish out tough games, which are promising skills heading into the season.

“We’ve got a lot of smart coaches in our league,” said Look. “But it’s wide open, and up for anyone to take that wants it.”

The boys water polo team will look to further establish their league position as they take on Mountain View and rivals Gunn next Tuesday and Thursday.