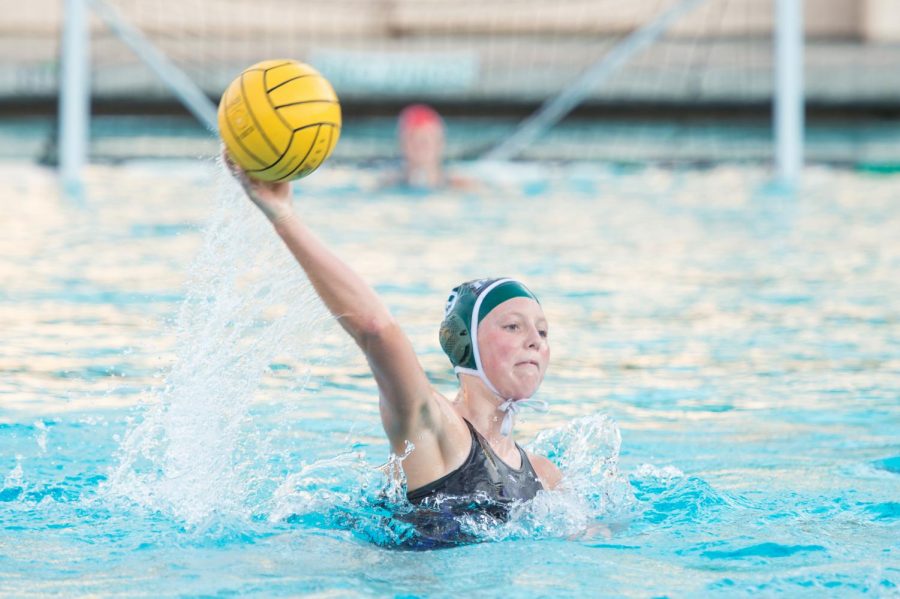 Girls varsity water polo was beaten by Mountain View 8-7 in a thriller league game Tuesday at the Paly pool. The deck was wet, the sky clear, and the stands loud when the water polo game started, at 3:30pm.

Chesnie Chung (‘20) was able to win the first sprint, and secure the first possession for the Vikings. The Vikings were quick to capitalize on the sprint, with a early goal from Hana Erikson (‘21) following her expert turn of a Mountain View player. From there, however, the Vikings began to lose momentum on both the offensive and defensive side of the game; The Mountain View Spartans responded with two quick goals before the end of the first quarter.

After a quick break, the Vikings reentered the pool for the second quarter. This time, the Spartans were able to secure the sprint, and score off of a drive. The quick goal electrified both Mountain View players and parents. Prior to the end of the quarter, the Spartans scored on two more occasions; It was clear that they were gaining steam. Following the end of the quarter, the Vikings exited the pool and gathered for a team meeting.

“We mostly talked about our defense” Estelle Martin (‘19) said. “We were letting them have quick, easy goals off of undefended drives.”

The score was 5-4, with Mountain View having a one goal lead going into the final quarter of Tuesday’s game. With new energy of their own, Mountain View was able to win the sprint and score twice before the Vikings had a chance to respond. After a nice block and counter attack pass from Esme Stotland (‘19), Gaither was able to score. With one minute left, the score was 8-7 and the Vikings were down one goal; They also had possession. With a full shot clock, and one minute left, the Vikings were not able to score.

“The game was really disappointing because we knew that we could have won” Martin said. “If we learned how to start the game with the same intensity that we finish games with, we would have beaten these girls.”

When asked about this week’s plans for practice, Martin felt that they should work “on communication. If we want to have a strong defense, we need to learn to let everyone know what is going on.”

The girls play against crosstown rival, Gunn High School, on Thursday night at 6:45.