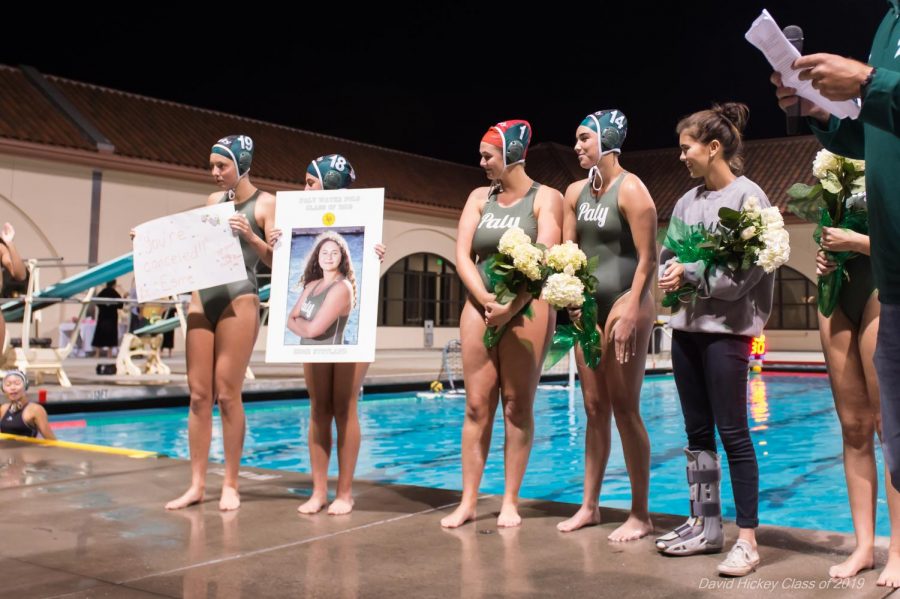 This wasn’t any ordinary game, however. Teammates, fans, and family members came out in full support of the seniors, Esme Stotland, Grace Rowell, Courtney Kernick, and Estelle Martin on their senior night to commemorate their last home game representing Paly girls water polo.

While the Vikings ultimately took a defeat on paper, it was nothing short of a large improvement. When the Vikings last played Gunn back in September, they fell 11-4, but this time around, they were able to minimize the scoring margin.

According to Chesnie Cheung (‘20), the improvement was largely attributed by Paly’s stellar defense during the match.

“We completely shut down their biggest threat,” Cheung (‘20) said. “She made 6 goals last time we played her and she didn’t make any this time.”

“[Stotland] was really on fire, and she helped us so many times,” Alexandra Lee (‘20) said.

This was more than just a game for the seniors. It was a chance to play with their fellow high school teammates one last time.

“Senior night was really special and it’s entirely because of the girls I get to play with,” Stotland (‘19) said. “I love them all so much and playing my final home game at Paly with this team is the best way I could have ended the season.”