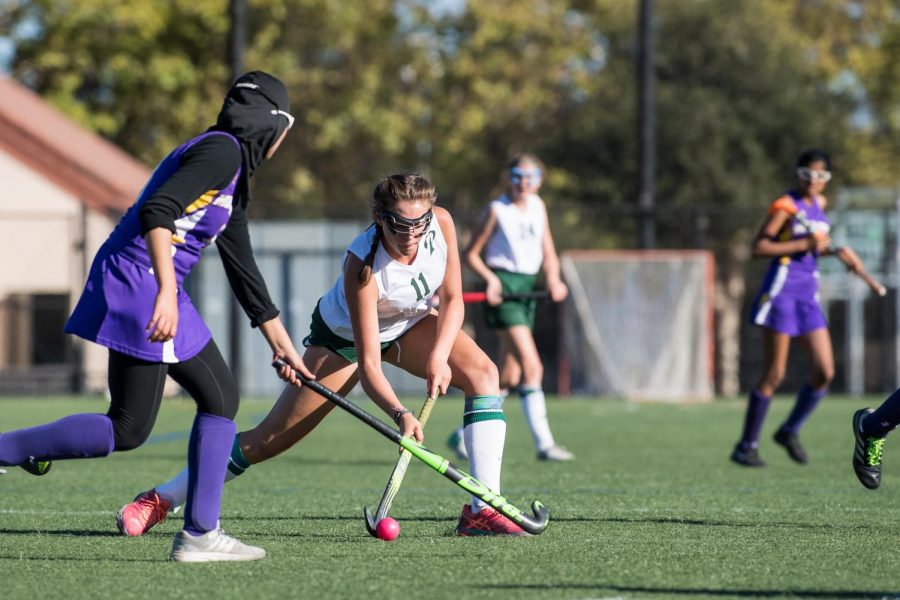 As the whistle sounded on September 11, 2018, the Girls Varsity Field Hockey team celebrated winning their first season opener as a Paly sport. However, this triumph was short-lived as they went on to win only one more game for the entire season.

Though only winning two games, the team often lost by close margins, trailing only one point behind Homestead, Lynbrook, and Saratoga. Led by coach Jenny Crane, the team wants to focus on stick skills, communication, and teamwork. Crane grew up in Los Gatos, where she played field hockey for the Wildcats, but then moved to St. Francis where she continued to play. She continued her passion for field hockey at the University of California, Berkeley where she helped lead her team to two conference championships. Crane says her days of playing at Cal have helped her set high expectations but also learn to balance by meeting the athletes at their current skill level.

“I can’t expect them all to have the skills that they haven’t acquired yet, but I can expect them to work hard,” Crane said.

Even though the score was close for a majority of the games, Paly often went scoreless, highlighting a need for offensive teamwork to get to the goal. Sophomore Anna Nemerov (‘22) recounts that the team tried to rely on speed and strength, but recognizes the critical need for better skills. Junior Alexa Gwyn (‘21) also emphasizes the need for general skill development and utilizing the skills taught, in a competitive setting.

“Last year’s [team goal] was learning, and this year it’s probably execution,” Gywn said. “So using those skills that a lot of the girls learned last year and trying to put them into gameplay.”

According to Crane, the team, made up of two seniors, seven juniors, eight sophomores, and four freshmen, has an interesting dynamic. Returning players Gwyn and Nemrov are expected to be a dominant force. Coach Crane realizes it’s a large team with a spectrum of skills. She’s hoping the athletes with more experience will step up and help lead the newer players. By taking on a larger roster, she’s building the foundation for a JV team leveraging the experience of the freshman to be leaders and mentors. Crane is hoping the team and community can encourage more girls to try field hockey.

“[The younger players] are the foundation. They are the thing keeping the ball rolling and still allowing us to develop our program,” Crane said. “The progress that they’ve made in just six practices has been amazing to see.”

Nemerov is excited to see the new girls develop a love for the game, just as she did. Realizing that the game of field hockey is difficult to pick up, she enjoys helping her new teammates learn new skills and techniques. Scoring more goals and winning is at the top of the checklist for Nemerov this year, as well as mastering her stick skills. She stated that she is looking forward to beating schools with newly acquired field hockey teams to build a name for Paly’s program.

“[We want to] score more goals and win more games, there are some schools that just got field hockey teams and we want to beat those teams,” Nemerov said.

Come support the team in their first game against Valley Christian, on Tuesday, August 27th, at 4 pm at Paly.