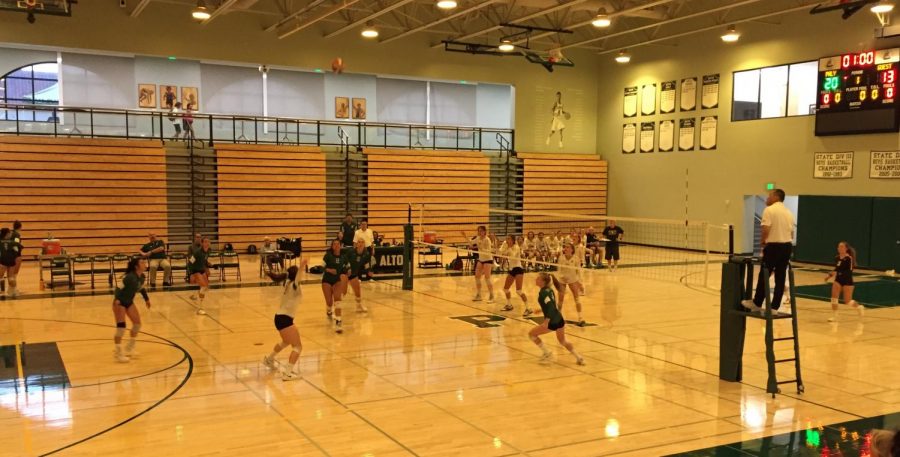 Paly players prepare to return a serve from the Mountain View Spartans.

Three-time reigning SCVAL champions, the Girls Volleyball team walked onto the court today with the intention of proving their strength as a team. Their goal was clear, to bounce back from the loss they had suffered against St Francis earlier this week.

They did exactly this, surpassing Mountain View’s Spartans 3 sets to 1.

Coach Chris Crader got the team hyped by comparing them to the NBA powerhouse that is the Golden State Warriors.

Amelia Vugrincic (‘22)  reported that Crader told them “Even we’ve seen the Warriors bomb games. We have to know that we have more than enough talent to annihilate all the teams.”

The Lady Vikes dominated the first set against the Spartans going 20-8 for the first 15 minutes of play. The girls led throughout the whole set, rounding out an easy 7 points over their opponents.

Notably strong offensively, Paly girls kept Mountain View on their toes. They knew exactly when to slam the ball down, and when to roll it over the net, keeping it out of the way of their opponents for a final score of 25-18.

The second set played similarly to the first. Although the Spartans came in with renewed energy, the Vikes kept the lead throughout the entirety of play, holding a ten point lead through the last few minutes to end winning 25-15.

Unfortunately, the third set did not go as well as the prior two. After taking the first point of the set, the Spartans revved up significantly from their earlier play. Paly matched up a few times, but ultimately couldn’t keep up, losing the match 21-25.

For the fourth set, the Vikes bounced back. Even though the Spartans took the first point, the Vikes refused to lag behind their opponents. They stayed on the ball, returning play after play to take the win 25-16.

Throughout the Spartan upset in the third set, the Vikings keep their spirits and their spirit high, staying vocal on the court and maintaining their high energy level.

“I thought that [the way] to beat this team was to bring as much energy as possible because it brings them down and brings us up,” Kylie Mies (‘21) said.