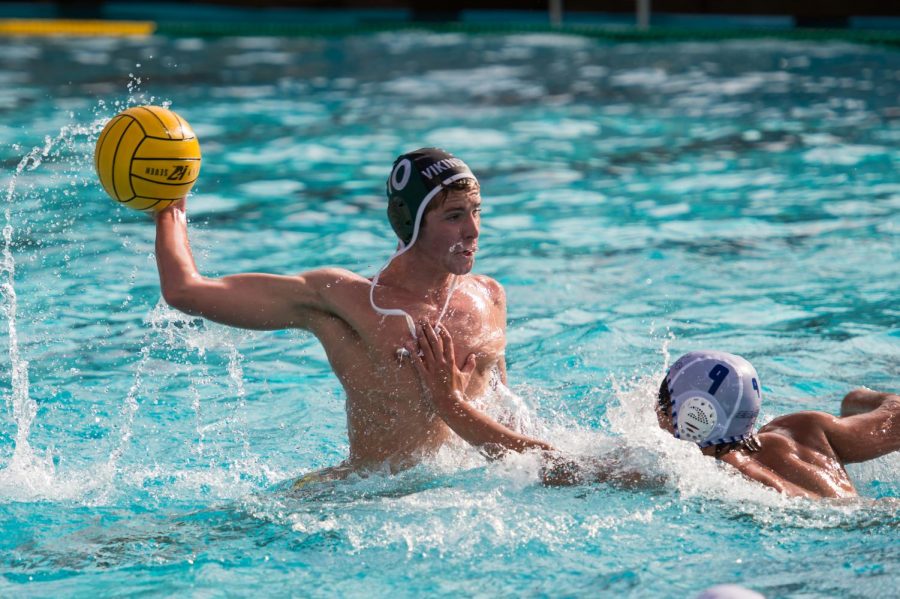 Senior Dexter Gormley takes a shot on the cage.

The Paly Boys Water polo team played against Los Altos yesterday, giving them a chance to face off yet again against their bitter league rivals, but unfortunately they fell short and lost 17-12.

The game got off to a bad start for the Vikings, who allowed 2 goals within the first minute of the game from Los Altos and trailed 4-2 after the first quarter. Paly stole the ball multiple times in the quarter, with Nick Hoffs (‘22), Dexter Gormley (‘20), and Ryan Stanley (‘20) recording one steal each. Unfortunately, they could not capitalize on the steals, scoring only 2 goals in total.

The second quarter was more of the same, with Los Altos driving the score up 7-4 despite multiple blocked shots by goalie Spencer Soohoo (‘21), including a save in the last 10 seconds of the first half. Zander Darby (‘21) scored the only second quarter goal for the Vikings during 6 vs 5 situation, netting the ball with a low outside corner shot.

During the third quarter, things started looking up for Paly from the beginning with Darby scoring in the first 40 seconds on a cross-cage skip shot. The Vikings got within 1 goal of Los Altos at a score of 9-8 thanks to a flurry of scoring from captains Gormley and Stanley, but could not hold on to their momentum and finished the quarter down three goals at 11-8.

Throughout the fourth quarter, Paly’s defense fell apart completely, allowing six goals on the way to a 17-12 loss. Two out of four of the final goals scored by the Vikings occurred when the game was already out of reach; both came during the final 15 seconds, including a garbage time buzzer beater by Stanley.

The theme throughout the game for Paly was failing to capitalize on opportunities made; the result of many good opportunities was the failure to follow through on the shots. This led to a lack of momentum on offense for the duration of the game, save the beginning of the third quarter.

Another common trend was Paly’s inability to defend the post position, with Los Altos delivering the same deadly post shot right in front of the cage over and over again. Junior Zander Darby reflects on the struggles Paly dealt with on defense with respect to defending the post position.

“We allowed too many goals from the post on six on five plays,” Darby said. “They had really good ball movement, which opened up the posts and we were too slow to get back to them.”