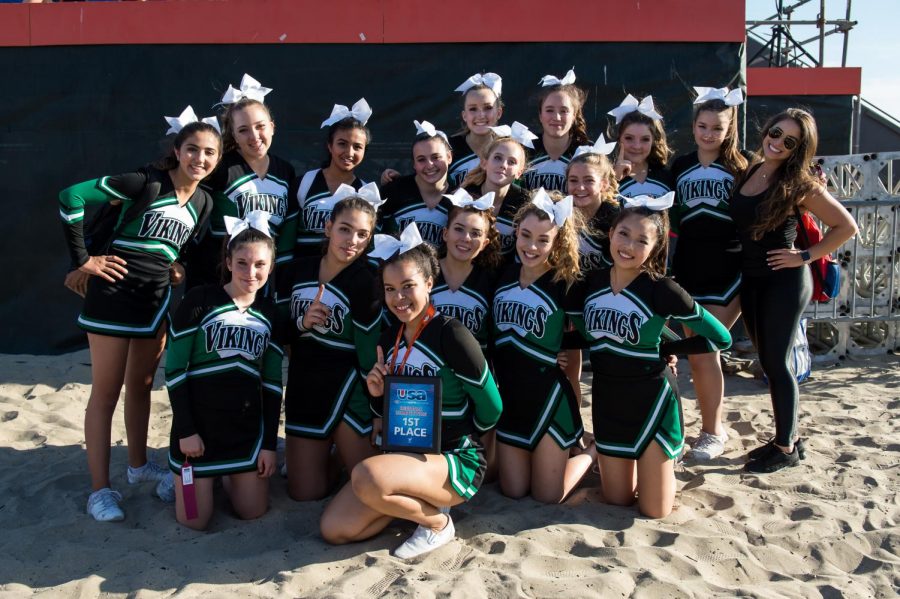 The cheer team with their first place award.

The Paly Varsity Cheer team won its first competition of the year. The 2019 CCS Champions competed against other high schools in the Kaiser Permanente Arena hosted by United Spirit Association. The team came out victorious in the novice non-tumbling division and qualified for USA Nationals.

The week started off rocky as freshman Natalie Karel (‘21) injured her ankle after falling out of a stunt Monday night. Karel believes she injured her ankle due to her nerves and that caused the rest of the week to go downhill. Despite this, the team was able to pull off a near-flawless performance.

Coach Lea Santini did not expect Karel to make a full recovery by the end of the week and was fully prepared to put another athlete in her spot. Coach Santini believed that no matter what happened, the team would be able to pull together and have an amazing performance.

“Inside I was freaking out but I know that our team is so solid and could have pulled it together if we needed to,” Santini recounted.

Fortunately, Karel only mildly tweaked her ankle and was able to compete in her first cheer competition.

Right before running onto the mat, Karel described how the team came together to encourage each other.

“I think I was panicking a lot but the entire team just huddled together and we just said positive words of how we knew we could do it,” Karel said.

Those positive words encouraged the team as they rallied onto the mat and got into their starting positions. A week full of rough practices did not deter the cheer team as they went on to hit all of their stunts with only a few bobbles. Even though the team might not remember their performance due to the adrenaline and excitement, Coach Santini says it was more than any coach could have dreamed of.

“They killed it,” Santini said. “They did incredible. It was way above and beyond any expectations a coach could have dreamed of.”

In reflection, Karel believed the team did their best and that they are focused on improving on making everything sharper and staying positive during practice.

The cheer team will return to the mat November 9th for another USA Competition in Tracy, California.