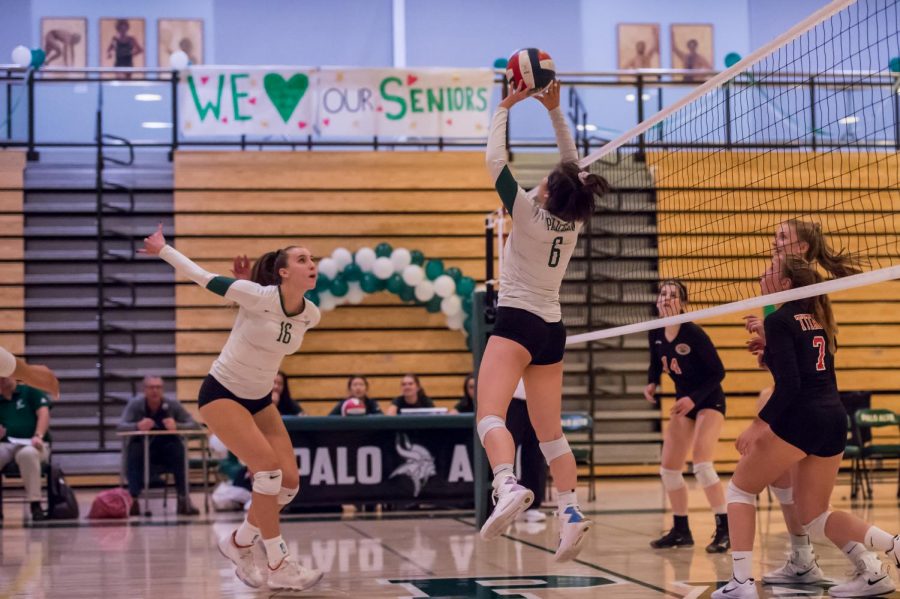 Friends and families of seniors Amelia Gibbs, Rebekah Limb, Grace Thayer, and Ashley Xu filled the gym in anticipation for the girls’ last home game of the season, and the Vikings did not disappoint.

Winning the first set 25-16, Paly started off  with a quick 6-0 lead, knocking the Titans off of their feet from the get-go. The seniors, capitalizing on their momentous night, acted as a backbone throughout the first set. Gibbs set the tone from the beginning, with kill after kill as she and Thayer led the Vikings to the point where Paly was ahead 9-1. Limb finished off the Paly dominated set, cleaning up the Titans with several killer serves.

Continuing with this momentum in the second set, Limb served two aces right off the bat, giving Paly the upper hand with a 4-0 lead. The Vikings stayed solid with several blocks from Thayer with the help of Sophia Krugler (‘21) and Thea Enache (‘22). Unlike the first set, Paly fell behind, however soon reclaimed its dominance by tying it back up 20-20 with a block from Thayer and Trisha Razdan (‘21). Thanks to a key defensive save by Xu on the last point, the Vikings clenched the set 25-21.

“It was definitely an emotional game and I think that showed a little bit in our playing because there were a lot of really high highs and really low lows” Krugler said. “But just to win was amazing because it made the night that much better.”

The third set ran tighter than the first two with the Titans holding on until Paly broke free at the 20-20 point tie. Thayer stayed consistent with her blocks throughout the set, earning a key point for Paly after a successful kill off of a long rally. Gibbs served to win the match point for the Vikings, sweeping Gunn 3-0.

“It was so cool to see everyone working together,” Gibbs said. “It seemed like because we had all of our seniors on the court, we were really cohesive and it was a really fun game to play.”

With that, the Vikings remain undefeated in league with a spotless 11-0 record, giving the seniors a positive point to come home with after an otherwise emotionally charged night.

“I have really mixed feelings [about it being senior night],” Gibbs said. “I was super lucky to be on really great teams all four years and it really does feel like a family. I’m really going to miss this team.”