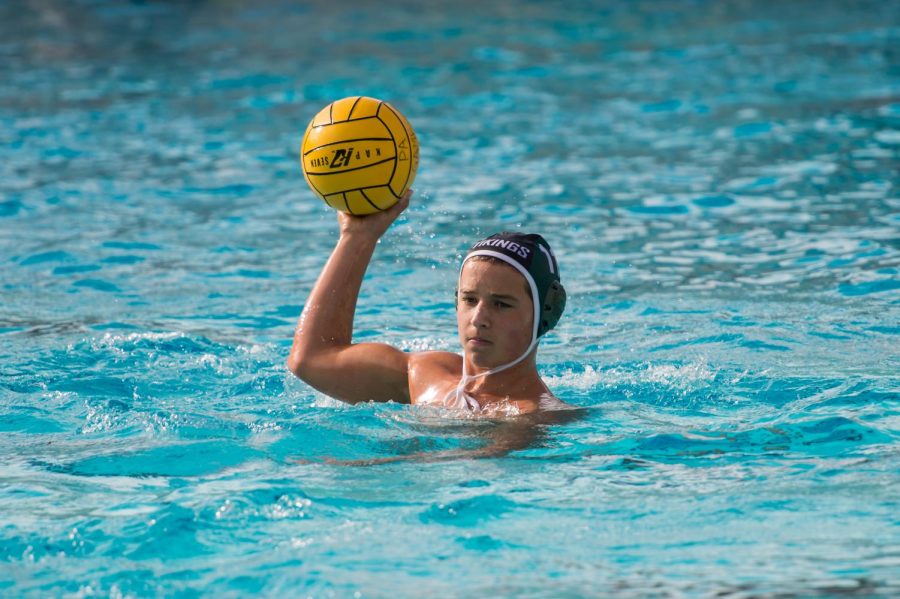 Sophomore Nick Hoffs prepares to shoot on the goal.

The Paly boys water polo team beat league rival Los Gatos with a score of 10-8 in the first game of the 2019 SCVAL playoffs thanks to a strong defensive performance.

The game was close throughout, with the score differential being never more than 2 goals at the end of each quarter. The key for Paly was their defense, which was led by captain Dexter Gormley (‘20) and goalie Spencer Soohoo (‘21).

The first quarter featured a back-and-forth between the two schools, with Nick Hoffs (‘22) scoring in the first 30 seconds and Los Gatos responding with a lob shot. Hoffs contributed another goal in the first quarter as the Vikings went into the second quarter tied 2-2.

“The highlight for me was scoring the first two goals because I feel like that got the ball rolling,” Hoffs said.

The second quarter was highlighted by a flurry of scoring by Paly, as Jonny Pei (‘21) scored off drawing a 5-meter penalty shot and the rest of the team kept adding on. Goalie Soohoo also contributed to a stingy defense, blocking shots multiple times leading into halftime with a score of 5-3.

The beginning of the second half included an offensive effort by captain Ryan Stanley (‘20), who scored multiple times as Superfan Dan led cheers from the stands. Despite this momentum, Gatos refused to let the game get away from them, scoring on a rebound goal and even getting an opportunity for a 5-meter penalty shot. But thanks to a tremendous effort by Soohoo, the goal was blocked and Paly went into the fourth quarter leading 7-5.

The fourth quarter had Paly holding on to their lead by putting up the same number of goals as their opponents on the way to a 10-8 victory. This was facilitated by a team effort, as Paly utilized their depth with Luke Thieman (‘21) scoring on an outside shot. Junior Zander Darby also contributed on a beautiful skip shot under the goalies’ arm.

“This game we adjusted to how they were playing, so we mostly controlled the game,” Hoffs said.

The victory was a direct result of Paly playing as a team and showing grit and determination. Captain Dexter Gormley exemplified this mentality, as he won all four initial sprints to help the Viking retain that extra possession. The Paly boys hope to continue their impressive play throughout the league playoffs and all the way into CCS.