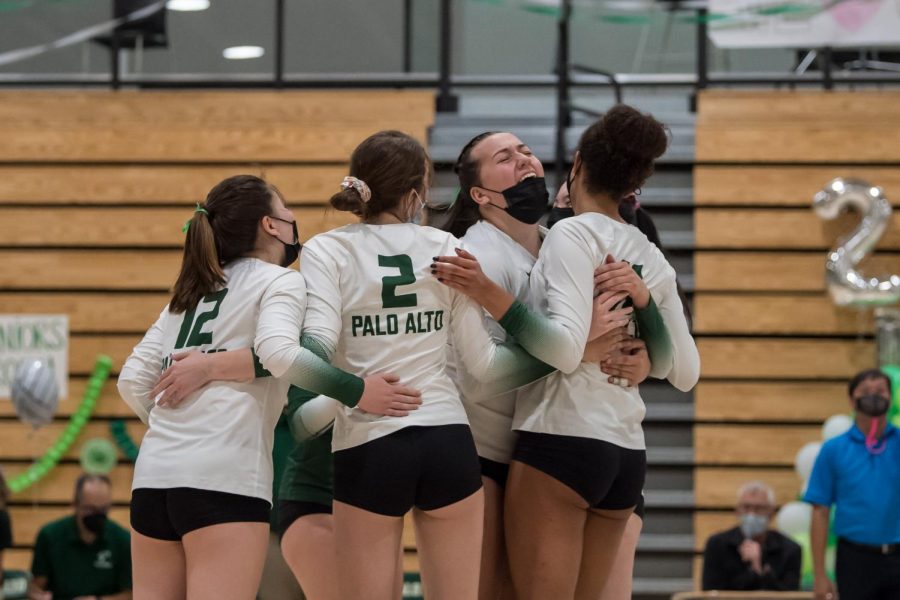 Girls volleyball beat Monte Vista in a rocky and emotional 4-1 win on the Viking’s senior night.

“It was a really special night,” Xiong said. “It really made me think of all the senior nights I’d been to before and it felt good to finally come full circle.”

The first set started off rough for the Vikings as Monte Vista pulled away with the first points of the match. Paly was able to catch up, but the two teams were neck and neck throughout the first set. The Vikings fought hard with strong kills and solid digs but the Matador offense prevailed, winning 25-22.

Despite a close loss in the first set, the Viking’s spirits were high going into the second. Cheers came from the bench, the court, and the stands as the first serve crossed over the net. With ease, the Vikings scored the first points of the set. Kill after kill, the girls found their rhythm and kept the momentum going. The Vikings pulled away with a score of 25-12.

The third set was tight as both the Vikings and Matadors had strong serves and impeccable defense. Monte Vista had a lead of 23-18 on the Vikings but Hathaway Bush’s powerful serves brought the teams to a tie. The girls finished the set with a close 27-25 win.

“Our team chemistry was great,” Enache said. “We obviously really wanted to win so we came back from a really deep deficit in the third set and the momentum continued for the rest of the game.”

After a close third set, the Vikings rallied once again in the fourth set and defeated the Matadors with a final score of 25-20.

Although the night was emotionally charged for the seniors, the girl’s season has not come to an end just yet. With an 8-4 record in league, the Vikings will play in the first round of CCS on Tuesday, November 2nd.