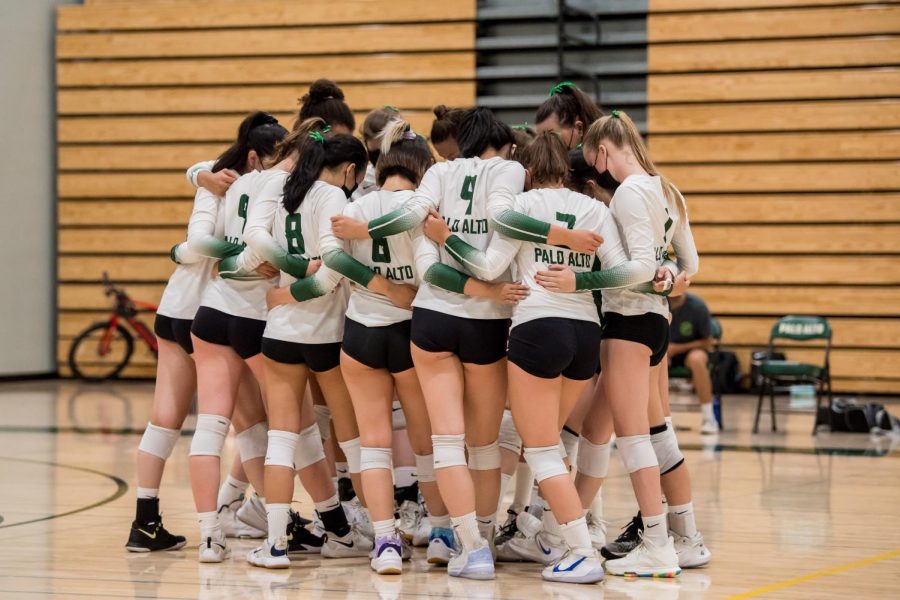 The Girls Volleyball season sadly came to an end with a loss against Menlo Atherton in the first round of CCS. Despite an upsetting final game, the Vikings battled hard throughout the season, placing third in league with a record of 8-4.

The team kicked off the season with an impressive non-league win against Menlo Atherton. In three quick sets, the Vikings displayed their electric team chemistry, strong defense, and powerful offensive skills that were consistent throughout the season. The energy carried over into the first three league games where the Vikings snatched victories from Monta Vista, Los Altos, and Gunn.

The Vikings faced several highly skilled teams this season. The team put up a fight against Archbishop Mitty who is ranked first in the West Catholic League and made it to the CIF State Girls Volleyball Championships. Los Gatos and Mountain View were tough league competitors for the Vikings and placed first and second in league this season.

Coming off the COVID year, the Vikings worked hard to get back into the groove of normal high school sports. Spectacular performances in league games also came with tough losses in tournaments and non-league matches.

“This season we definitely had our ups and downs, and ultimately had an outcome that wasn’t what we had hoped for,” Junior Jess Watanabe said. “I think there was a lot of inconsistency, especially toward the end, which was really noticeable in our game against Menlo Atherton, but overall I’m proud of our team.”

Despite the loss of several seniors this year, the team gained new talent. Freshman Sophie’s Mies had her varsity debut this season and became a key server for the Vikings. In high-pressure moments, Mies’ serves were consistent and scored the team valuable points.

Senior Owen Rice came back for his second season of assistant coaching and team managing this year.

“This was a really fun season that was full of many ups and downs,” Rice said. “But in the end, I feel that most importantly everyone really improved and came together as a team to play and get a lot stronger.”

Overall, the team is proud of their accomplishments and thankful to have gotten the chance to play with one another this season.

“It was such an honor to play with such talented and powerful women,” Junior Evie Kramer said. “Despite the adversities, I’m so proud of the team and wouldn’t trade the season for anything.”