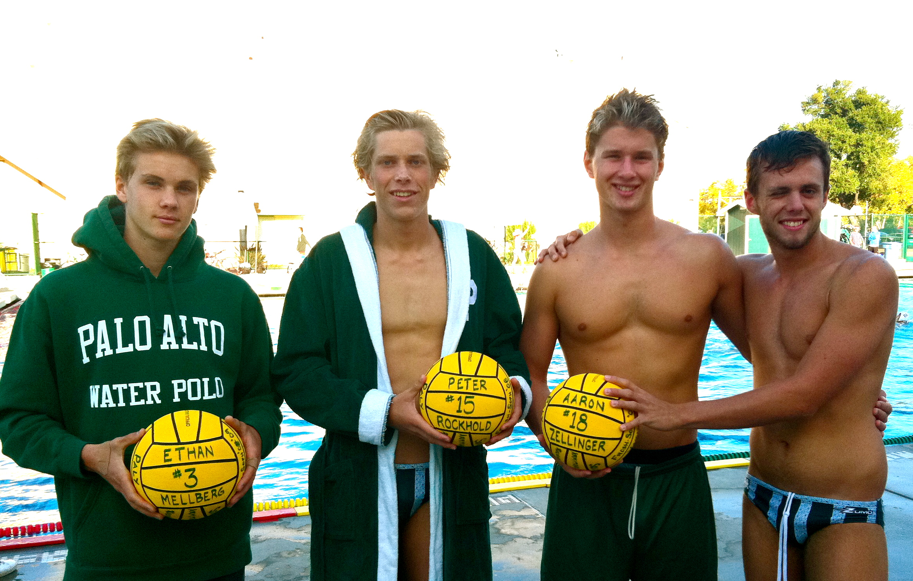 Seniors Daniel Armitano, Ethan Mellberg, Peter Rockhold, and Aaron Zelinger stand before the Paly pool together on their senior night.

The Vikings got off to a good start when co-captain Peter Rockhold (‘12) scored the first goal with four minutes remaining in the first quarter.

Gunn was quick to answer Rockhold’s goal with a goal of their own to tie the score at 1-1.

The Vikings answered with goals from co-captain Aaron Zelinger (‘12) and Nelson Perla-Ward (‘15) to wrap up the first half of the game at a score of 3-3.

Despite the Viking’s comeback in the second quarter, Gunn continued to dominate throughout the rest of the second half. The Titans started the second half with a quick goal to put themselves ahead of the Vikings by a score of 4-3. This was the only goal the Titans would put away in the third quarter. But, Gunn was able to tack on another goal in the fourth quarter to give them their fifth and final goal on their way to victory.

Although this was a disappointing loss for the Vikings against their crosstown rival, goalie Daniel Armitano (‘12) still sees this game as an opportunity for the team to learn there is room to improve for future games.

Gunn’s head coach Scott Foster felt his team was well prepared for the match up.

“[The game] was exactly what we expected. we just did the things we practiced every week: we played hard defense and moved the ball well… we didn’t do anything amazing,” Foster said.“We know we are well matched. We knew it would be a hard-fought match.”

Armitano does admit that his team could have performed better.

“We went into the game with a different mentality and I think we need to change that,” Armitano said. “We need to warm up harder.The team mentality was a little laid back- a little too laid back. It doesn’t happen often, we were happy to play. We were going in very happily, not focused enough.”

The Vikings’ next game is against Homestead High School, who Paly beat 22-1 on Oct. 4.

“We still need to try,” Armitano said. “We definitely need to prepare for (Santa Clara Valley Athletic League Sectionals (SCVALs)) and get a different mentality going into the game.”