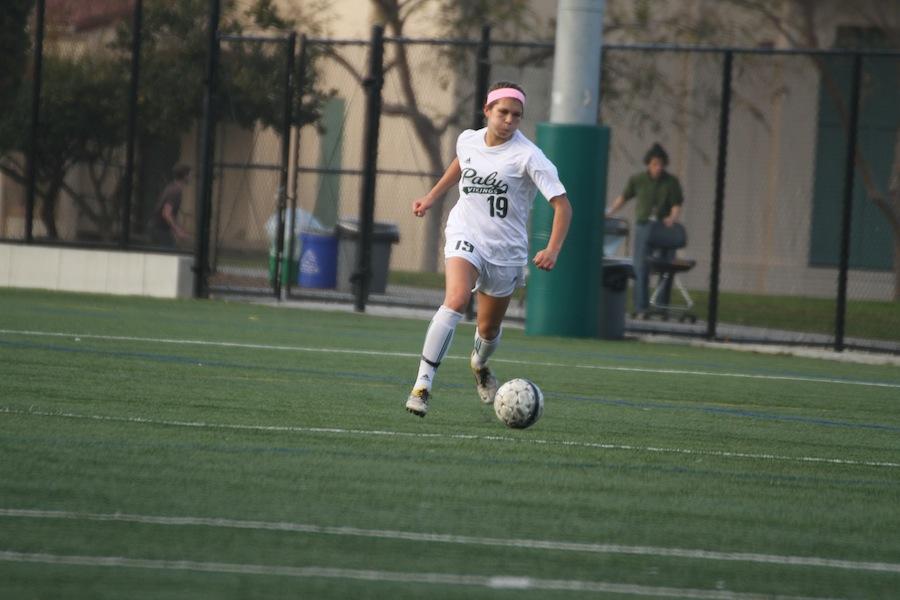 Jacey Pederson (’16) walked onto the Palo Alto High School campus less than one year ago. However, if you are a soccer fan, or are simply a person who appreciates talent, then you most likely already know of her. With the school year coming to a close, the Viking Magazine has awarded Underclassmen Female Athlete of the year to Jacey. She wins this award for her play on the soccer field. This season, Jacey was awarded first team all De Anza league honors.

Jacey has been playing soccer since first grade. From day one she found an extreme passion for the game.

“My favorite thing about soccer is how you can step on the field and forget about everything,” Pederson said. “You can just express yourself completely.” Being a high school student is not easy and Pederson is definitely grateful that she has soccer to help her “get away” from the many stresses Paly and most high schools have.

Although soccer is Jacey’s outlet for fun, her schedule is far from relaxed. Besides playing for the Paly girls varsity soccer squad, Jacey also plays for a year-round travel soccer club called PSV Union FC. “I practice Monday, Tuesday, Wednesday, Thursday, Friday, and usually have a game on Saturday and/or Sunday,” Pederson (’16) said. Despite the endless practice and play, Jacey is so grateful to play on such a competitive soccer team. “By playing with a travel team, and with some of the best girls in the Bay Area, it really improves my game,” Pederson (’16) said. “We all have standards for each other which helps us to develop as players.”

Practicing nearly ever day of the week simply isn’t enough for Jacey. On top of her excessive practicing, Jacey works on her own time to get even better. “I usually train by myself 2-3 times per week working on more individual skills,” Pederson said. “I do core strengthening such as sit-ups and push-ups pretty much every night.” Teammate Sunny Lyu (‘14) plays on Paly and for PSV Union FC with Jacey and is extremely impressed with Jacey’s work ethic. “In my opinion, despite her incredible athleticism, her differentiating qualities are her work-ethic and determination,” Lyu said. “She motivates me and other teammates to work hard and put the time in.”

All of Jacey’s extra work and intense practicing doesn’t go unnoticed. She was named a member of the Under-14 and Under-15 United States Women’s National Soccer Team. She is also currently in a pool of players that compete for the Under-17 women’s national team. “I just went to Costa Rica with the Under-17’s to play Mexico, Japan, and Costa Rica,” Pederson said.

Jacey loves the game immensely. She does not want to stop playing after high school. In fact, for quite some time, Jacey has had her hopes set on playing college soccer. “I do want to play college soccer,” Pederson said. “I have known I wanted to play soccer in college probably since 6th grade.” Although Jacey is still just a freshman, she has already gotten some interest from impressive schools such as the University of North Carolina, Duke University, UCLA, and USC. Lyu (‘14) definitely thinks that Jacey is athletic enough to play at the next level and says the two work all the time to push one another and get as good as they possibly can be.  “Jacey and I train together all the time,” Lyu (‘14) said. “We usually do fun technical things like juggling, dribbling, and shooting. Sometimes we work out or go on runs and push each other too.”

Paly is more than excited to have such a gifted young athlete be a part of its soccer program. Jacey is equally happy with being a member of the team. “Paly soccer was fun, frustrating at times but fun,” Pederson (’15) said. “The training environment was a lot less intense/demanding then at club, but it was good getting to represent my school and play with people from my school. My favorite moment was our first CCS game at home when we won 5-0 and there were a ton of people there and it was just awesome.”

Jacey loved playing for the team this year and hopes for even more promising seasons in the near future. “I hope that over the next three years, our program gains more participation from players who opt to play just club,” Pederson said. “I also want to try and get more people out to our home games, and get a better environment for the games. It’d be awesome to win CCS within the next three years as well.”

Foug (‘15), just like Jacey, is excited about upcoming seasons with this young, talented soccer team. “We were quite a young team this year and without the disqualification I think we could have made it far,” Foug (‘15) said. “With the similar team next year I feel we will be able to do even better because we are all already familiar with each other.”

Jacey is not the only member of her family to be excelling at a high level in their respective sport. Her oldest brother Tyger Pederson is currently a senior at the University of Pacific and plays second base for the team. Joc, the second of Jacey’s three older brothers, is currently playing professional baseball for the Los Angeles Dodgers. Joc was drafted in the eleventh round of the 2010 MLB draft and was awarded Dodgers minor league player of the year last season.

Needless to say, Jacey comes from a long line of gifted Pederson athletes. Despite being apart of an extremely competitive family, Jacey does not feel any pressure to be any greater than her best effort. “I’d say that my family definitely isn’t the pushy type,” Pederson (’15) said. “They’re going to support me but not force it upon me. Ultimately, they let me make decisions regarding soccer and sports.” Jacey is grateful to have such talented brothers though and is inspired to work as hard as they do to be great athletes. “My brothers are always going to the field to play catch, or are going to the gym so it motivates me to want to go too,” Pederson (’15) said.

Jacey Pederson is this year’s Viking Sports Magazine Girls Underclassmen Athlete of the year. The award is voted off of pure athletic ability as well as a good work ethic. Foug (‘15) and Lyu (‘14) both agree that Jacey possesses both of these important traits and is going to be a very exciting athlete to watch over the years to come.