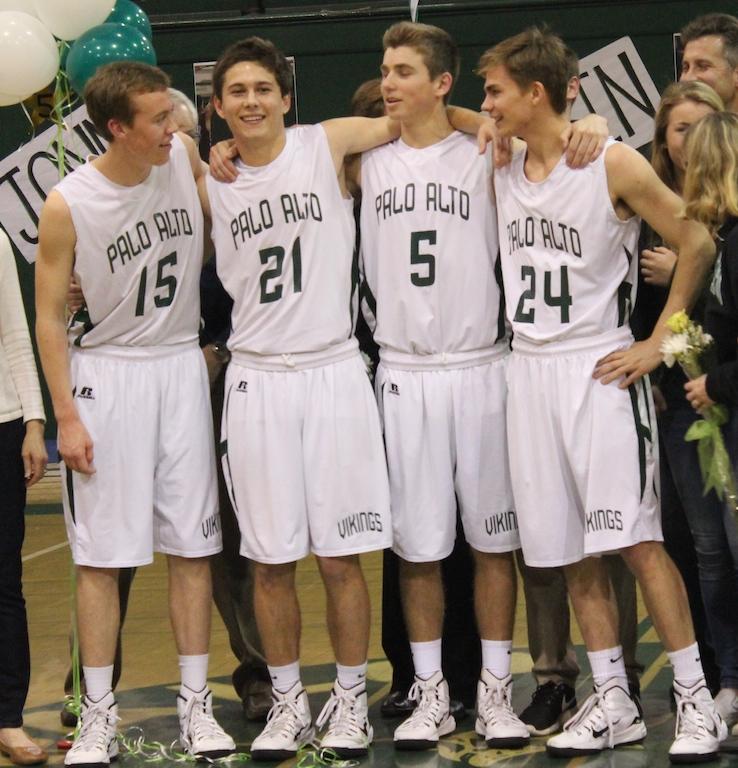 The four seniors Corey Bicknell (’15), Kevin Mullin (’15), Jonny Rojahn (’15) and Alex Dees (’15) smile big on senior night as they prepare to to play in their last season home game ever.

Boys’ basketball protected their own court in their senior night game against cross town rival Gunn High School with a 17 point win 71-54. The graduating seniors, Corey Bicknell (‘15), Alex Dees (‘15), Kevin Mullin (‘15) and Jonny Rojahn (‘15) stepped up despite the contest not being a league game.

The Titans may have won the tip, but Paly battled back with a huge rebound from Justin Hull (‘16) who threw it down the court to Dees for an and-one. Mid first quarter the Titans got their first bucket, but was combatted with a three-pointer by Rojahn for a 7-2 lead. Gunn went hard to the offensive boards, but Bicknell and Rojahn hit two threes to give Paly and early lead of 15-6. The Titans started a come back while Paly fouled, but the quarter ended 17-13 in favor of the Vikings.

“It’s always a huge game when we play Gunn but I’m really proud of how we played tonight,” Rojahn said. “Everyone on the team contributed and it was a great overall team win.”

The second quarter was the most interesting quarter as the Titans came out hard looking to clinch a win. Chris Rusell (‘15) from Gunn got his own rebound and scored the putback, blocked Oliver Svirsky’s (‘16) shot, then hit teammate Alex Gil (‘16) for a three to pull ahead by one point. Sharp-shooting Mullin refused to lose this game and knocked down a deep three to make the score 20-18 Paly. Hull increased the lead to four with a crafty reverse layup. Both teams had a few turnovers and Mullin airballed a three followed by another missed three by Rojahn. Titan’s secured the rebound and hit Russell for a three to cut the lead down to two points. The Vikings then turned the game around with a three from Bicknell assisted by Miles Tention (‘17), a reverse layup from Mikey Grandy (‘16) and an and-one from Mullin to make the halftime score 31-25 Paly.

“We did a good job pushing it up the court and getting the open threes that we usually get,” Grandy said.

Second half was filled with rising emotion and increasing tension as the Viking’s solid defense lead to a quick change of pace. Rojahn both rebounded the ball and hit another three, he ended the game with 18 points and four threes. The Vikings remained unphased by Gunn’s full-court press. Grandy dominated inside the key and the Titans had no chance of stopping him. Freshman Max Dorward (‘18) showed up his brother on the Titans, Lukas Dorward (‘15) by finishing the game with four points and a blocked shot. The third quarter of play ended in a Paly lead of 52-36 after hitting three three-pointers.

“I thought it was a great game,” Dees said. “Both teams really showed up to play, and both 6th mans were incredibly big tonight, it was fun to be apart of.”

As the buzzer sounded to signal the fourth quarter, the Vikings ran the Titans off the court to secure a senior night win. Mullin started the quarter with a hard drive to the basket and made both free throws after being fouled. Gunn stole the ball, but Rojahn creatively picked the Titan’s point guard and finished down the court. Svirsky and Mullin combined for 13 points in the fourth quarter to clinch a twenty point lead. Gunn could not handle the Viking’s fast pace and unstoppable offense, but Titan’s own Gil hit a three with four seconds to create a final score of 71-54. As the clock counted down the Paly student section stormed the court as nothing gets them more excited than beating Gunn. The Vikings take on Homestead High School January 23 at 7:45.

“We’re lookin to win the league and we can do so if we win the rest of our games,” Rojahn said. “If we keep playing the way we’ve been playing with good defense and ball movement I think we could win league and go far in CCS.”

One Response to “Boys’ Basketball defeats Gunn on senior night”