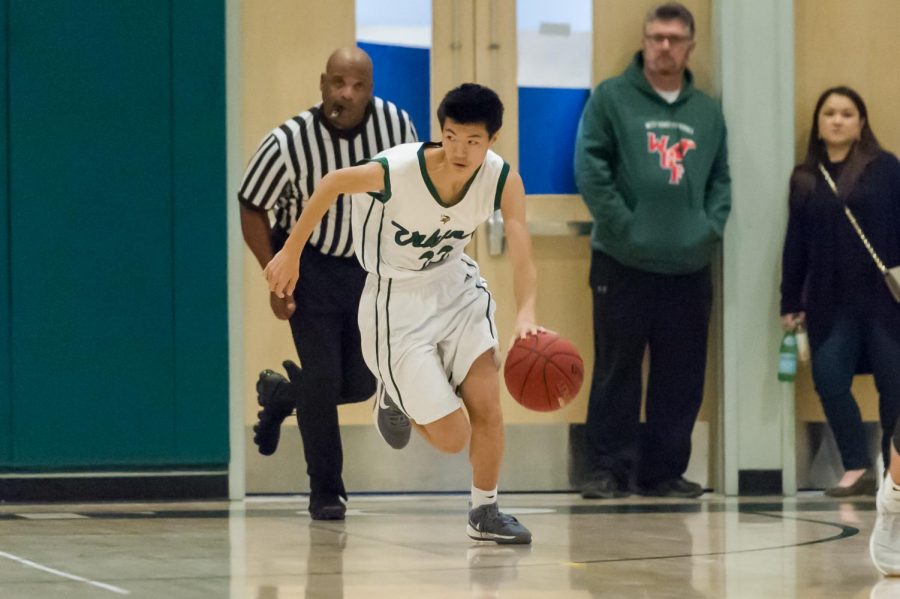 A basketball in one hand a textbook in the other. Like many Paly athletes, senior Marvin Zou must find a balance between academics and athletics. Zou, currently a senior at Paly says he has to constantly use his time effectively and efficiently so that he can maintain a high performance level with his difficult school schedule along with his daunting athletic schedule. To a greater extent than student athletes in other communities, Zou said he is unable to focus on just one facet of his life. There is always a second task that must be focused on.

One issue with Zou’s current schedule is that it is difficult to keep up and give 100 percent effort in both school and athletics. “For basketball practices and games take up two and a half hours each day, 6 days a week so it’s hard to finish all the work while still being able to commit myself to basketball.” Zou said. This busyness could result in Zou making a silly mistake on his AB Calc test due to a late practice the night before. Or it could result in Zou making a mental mistake on the court because he was up until 2 the night before trying to study for his AP Psych test. Humble and tough by societal standards, Zou does both with full effort without complaining, but sometimes this balancing act does affect his academic and athletic performance. In fact, Zou even went a step further academically as he was taking an extra class. “Junior year I took an extra class so I didn’t get a prep for playing basketball, so I had a lot of work I had to do with minimal time,” Zou said.

Undeterred Zou has even decided to replicate his non-prep schedule from last year, but this time with even more difficult classes.

“This year I won’t have a prep either because I’m a senior taking seven classes,” said Zou, “and I’m taking harder classes than last year, so I need to be prepared for the workload.”

One may think Zou would only be busy during the winter season because high school basketball is only during the winter. However, he says this is a misguided conception. Zou may actually be the most busy in the offseason. In the fall, Zou isn’t playing high school basketball, but he does show up to conditioning for the high school team. Not only does Zou have obligations for Paly, but he also has club basketball which requires much more traveling. He said this is especially detrimental to his “free” time on weekends because he may be playing in tournaments in Las Vegas or Los Angeles that will cut into his studying time. Even worse, the spring may be even busier as he is also involved with the badminton team.

Much like the basketball team, he said he practices every day during the badminton season and will often return home late only to find a daunting pile of homework. Zou said he views badminton as a second sport and doesn’t spend much time with it outside of the school season, otherwise sleepless nights could be a common occurrence in his life. If all this wasn’t enough, Zou like many other seniors is currently sending out college applications. Although it may not take up much time during the week, he spends a lot of time on the weekend grinding through essays..

Even though Zou said he is a busy Paly student-athlete, he still finds opportunities to do the things he truly enjoys during his limited free time including hanging out with friends, watching his fantasy football team dominate on Sundays, and spending time “coaching” his less talented friends in their recreational basketball league.“I understand with my busy schedule I won’t be able to do everything I want socially, but I’m willing to make the sacrifices so that I can improve both athletically and academically.” Zou said.