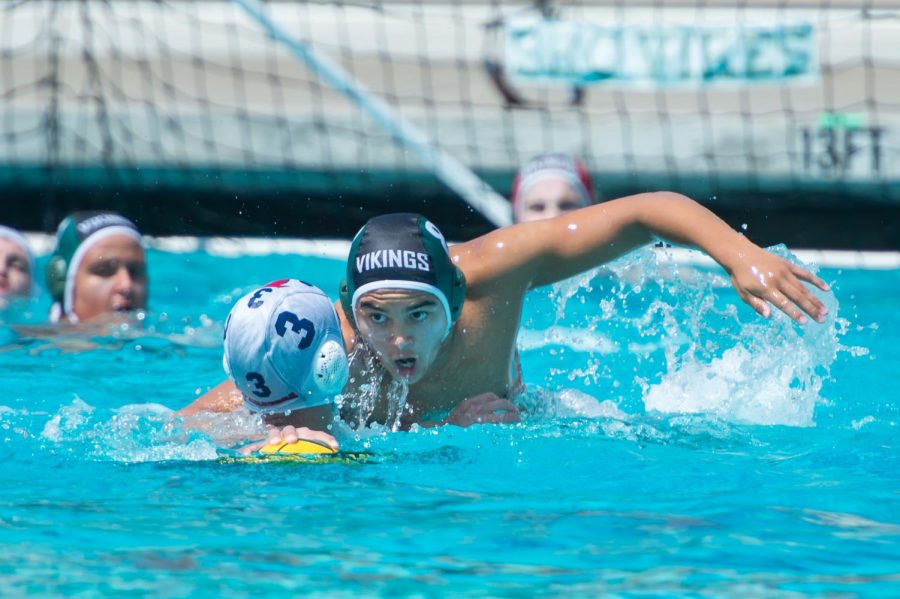 A time out is called with one minute on the clock. Paly’s up 13 to 12.  A tangible wave of anger surged through the crowd as the referee made another atrocious call.

“Two hands! He literally threw up two hands,” a member of the crowd shouted across the water, incredulous at the abuse Paly was the ref was dealing Paly. While the crowd was obviously outraged, the players on the sideline  had to be forced into their chairs to contain their frustrations.

As the game starts again, Mountain View has possession on Paly’s pool side. Unbelievably, they infiltrated Paly’s defense and made the shot. Paly players slam on the water, forcing great columns of blue and white to shoot up from the surface of the water as the angry murmurs of the crowd swelled to a symphony of cheer and support for their beloved Vikes.

With 27 seconds to go, the game was tied. Mountain View subs in another player. With momentum, the Spartans crossed down the pool into Paly’s defensive region. After the other team passes the ball around, trying to find a gap through which they can make the final shot, they land the ball in the goal as the buzzer beater sounds, winning the game 14-13.

But this ending does not tell the full story- Paly’s skill and chemistry was evident in the incredible game they had. The Vikings were virtually ahead the entire game and often by a wide lead.

“We fought until the last second and played a great defensive game,” Zander Darby (‘21) said.”Overall, we were ale to limit their offensive to inside water shots which was great.”

In particular, Co-Captain Ryan Stanley (‘20) had a great game and scored five goals, one off of a penalty shot.

“My favorite moment was when Dexter Gormely scored under water with two guys defending him and the goalie didn’t realise he still had control of the ball,” Darby said.

However, Gormely was unable to contribute to the Viking’s effort the majority of the game as after three ejections he was forced to sit the rest of the game.

Despite losing such a key player, the other Vikings fought valiantly.

Goalie Spencer Soohoo gave was a strong defender at the goal and the other points on the board were contributions from Darby, Luke Thieman (‘21), Co-Captain Dante Garretto (‘20), Nick Hoff (‘22), and Johnny Pei (‘21)..

Despite the collective killer performance of the VIikings, they suffered five ejections through out the game, forcing them to play one man down for a period of time. Three ejections were on Gormley, one was on Garretto, and one on Ryan Wisowaty (‘20), while Mountain View was only given one ejection through the entirety of the game.

“We’re quite upset about the outcome of our game,” Garreto said. Although they lost, the Paly Boys Waterpolo had a tremendous game that showed great potential for the team. In a sense, they won in that they have gained experience and an avenging sentiment that could lead them to great victories this season.

Come see their next game and support the Vikings!